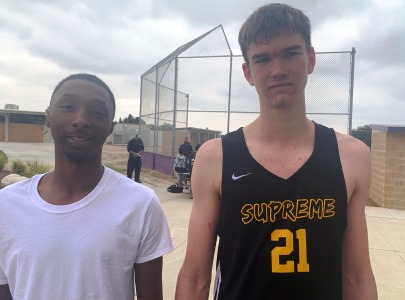 Two of the state's elite prospects and also considered among the top overall prospects in America's 2022 Class, are both playing for the same local club program - the Nike sponsored Arizona Supreme.  While both playing for their respective top-rated high school basketball programs in the state this season, the superstar freshman duo of 6-foot-11 freshman post Dylan Anderson and 6-foot-3 freshman guard Devontes Cobbs have teamed up to compete together with the AZ Supreme this club season.

This weekend, I had an opportunity to watch the two prospects perform in fine fashion, while taking part in the Pangos Spring Live event in Los Angeles, California, this weekend.  In the event, the loaded young 15U team proved how talented their team of young prospects are - finishing with an undefeated 4-0 record in the event.  The team not only went undefeated, but also blew out their competition in the tournament.

Leading the way, of course, for this gifted group of young prospects were Anderson and Cobb.  While it had seemed earlier during the year that the two prospects would not play together, these two young and gifted prospects decided to bring their unique talents together and play for the same Arizona-based club program.  While many other top-rated young prospects have decided in recent years to play for out-of-state club programs, these two young men would rather represent their state and bring more respect to Arizona, while also helping the recruitment of other young top-rated prospects on their team.

Perry High School's Dylan Anderson is fresh off a Top 10 national ranking among the nation's top overall prospects in the 2022 Class, and a #1 overall ranking among centers in the class.  Anderson is a sure-fire future pro prospect already, and is garnering loads of high-major division-I attention already.  He eventually will receive an offer from every elite program in America over time, as he has an elite body, size and length for his very young age.

Anderson competes very hard on both ends of the floor and competes at a high level.  He has a very nice skill level for a prospect so young as well, knocking down numerous perimeter jump shots with range this weeeknd in LA.  Anderson is very mobile and fluid in the manner he runs, and he plays with a unique level of purpose every time he touches the floor.

Anderson is an attractive a prospect that I have ever seen at his young age, and he shares a resemblance to former Duke star forward Christian Laettner as a player.  Anderson's potential as a player is limitless, and he will do a lot in bringing more respect to the state of Arizona's basketball, similar to that of star Pinnacle HS guard Nico Mannion, over the next (3) years of high school.

Shadow Mountain's Devontes Cobbs is another absolute stud that moved to the state of Arizona this fall from Milwaukee, and changed the game immediately after arriving to the state, as he quickly moved into Shadow Mountain's terrific and veteran starting lineup as a mere freshman.  While moving to Arizona already possessing a Top 30 national ranking in the 2022 Class, Cobbs has blossomed in his freshman season in the state - helping lead Shadow Mountain HS to their 4th consecutive State Championship.

Since the end to the high school season, Cobbs teamed up with Anderson - now making one of the nation's elite young 1-2 punches in America.  This weekend, Cobbs was electric - scoring in bunches from all angles of the floor, slashing to the basket and finishing strong and dunking the basketball in fine fashion over defenders.  Cobbs defended hard all over the floor as well, and played inspired basketball with a seriously high motor on both ends of the floor.

I caught up with Anderson and Cobbs immediately following their big win over a talented Compton Magic Red (CA) team, and both prospects were very excited to play together and advised me that they are excited about the remainder fo their spring and summer.  When I asked them what was next for them, they both advised me simultaneously, "The Peach Jam."