Amari Hudson Explodes For 55 In Big Win For Skyline Prep 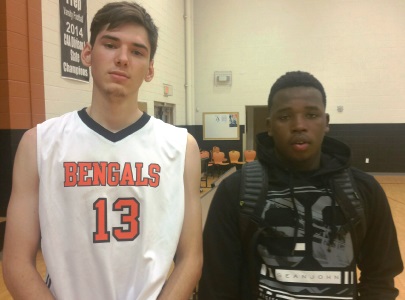 Skyline Prep High School is a newer school located in South Phoenix and is a member of the Canyon Athletic Association (CAA), a charter school.  Most basketball enthusiasts in the state have not seen the level of basketball played in this conference, as the teams that play in this conference have gone unnoticed and without attention for many years.  Simply because these high school teams do not participate in the Arizona Interscholastic Association (AIA), they have soared well below the radar as their accolades have been diminished and often ignored.

This high school season, after already venturing to Tri-City Christian High School last week, our Arizona Preps' staff decided to attend another match-up between two lesser known teams in the state - Skyline Prep High School and Salvation Army.  Salvation Army, which is operated by Nate Scott, is a new school also which operates out of the beautiful Croc Center in South Phoenix.  The school has (3) locations in Phoenix, Mesa and Casa Grande, and will have their high school graduation on Wednesday for some of their students.  The program is NCAA accredited.  Salvation Army came into Tuesday night's match-up undefeated on the season at 7-0.

They would face Skyline Prep High School, which is a beautiful school located on 40th street and Baseline.  Skyline Prep is led by the play of two former AIA top-rated prospects - 6-foot-7 junior forward Seth Mason and 6-foot sophomore guard Amari Hudson.  Mason previously attended Pinnacle HS and Hudson previously attended Basha HS.  Both prospects are among the elite prospects in the state of Arizona currently.

The game would be played at a high level all night long, as both teams were athletic and competed with a high level of intensity.  The pace and the intensity of the game was as good as I have seen all season long.  In fact, other than the epic Findlay Prep/Shadow Mountain HS match-up last week, this would be the best game I have witnessed this season.

After a good first half of action, and with Salvation Army taking a 39-33 first half lead, the game would absolutely heat up in the second half, as Skyline's Amari Hudson would flat out take over the game - and I mean take over the game!  Hudson would put his Skyline team on his back - seemingly scoring almost every time down the floor after driving hard  to the basket.  Hudson is a mere sophomore guard and a member of the 2018 class.  I have not seen another guard this talented in the state at this age, or this physical of a guard in the 2018 class.

With :14 seconds left to play, Salvation Army's 6-foot junior guard Elijah Mead, who had an excellent showing in this game as well, would throw a no-look pass after falling out of bounds, to an open teammate - 5-foot-11 junior forward Joel Mendoza.  Mendoza would lay the ball in and tie the game at 82 all with just :04 seconds left to play.

The game would go into overtime, and Hudson and his teammates would turn up - continuing their strong play and momentum in the overtime period.  Skyline Prep would win the ballgame, 96-93 - handing Salvation Army their first loss of the year.

Get this - Amari Hudson would finish with a game-high 55 points in the victory, the best performance of the Arizona high school season.  Hudson is a mere sophomore prospect, but is a very physical guard prospect with excellent toughness and a strong ability to make plays off the dribble.  He enjoys physical contact and bounces off defenders like they aren't even there.  He is an excellent rebounder and finisher inside the paint.  This young man is a native of Chicago, after just moving to the state of Arizona just (4) years ago.  He is a big-time college prospect already that will have college coaches soon salivating.

Salvation Army's Elijah Mead is among the best 2017 prospects in the state, and one of the most talented guard prospects I have seen in the class.  Mead is an athletically gifted guard prospect with a nice handle of the basketball and a strong ability to get to the basket and finish.  He thrives in an uptempo style of play and is very good in the open court.  Mead has the potential to play at a mid-major division-I program as well, and is one of the better guards in the state - regardless of class.

After almost ignoring these schools over the years and missing on many of the prospects that compete outside of the AIA, I will not make that mistake again, as some of these programs are absolutely loaded with talented prospects for college programs.