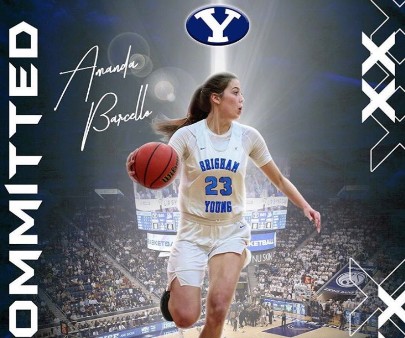 The Barcello family is one of the best basketball family's in the history of the state of Arizona - producing numerous Division-I players for the collegiate ranks. The latest family member to follow the trend is Seton Catholic High School's 6-foot senior guard Amanda Barcello. After helping lead the historic Seton Catholic girl's basketball program to last year's 4A State Championship, another state title for legendary Head Coach Karen Self, Barcello has now given a verbal commitment to a West Coast Conference (WCC) program.

Late last week, Barcello announced her decision to commit to Brigham Young University (BYU) and Head Coach Jeff Judkins and his basketball staff. Barcello released her commitment on social media outlets, and had this to say regarding her big decision:

"I am super excited to announce that I am committed to be a part of the BYU fam! I am looking forward to carrying on my basketball career in a program that will not only help me grow as an athlete, but also as a person. I’d like to thank God for blessing me with the gift and ability to play the game I love. I’d like to thank my mom for supporting me through this long process. I’d like to thank my siblings who have been amazing role models in this process. I’d like to thank Coach Karen, Coach Jen, Coach Tiff, Coach Kayla, and Coach Tim, as well as Coach Karre, Coach Ben and the rest of the (Arizona) Select Family. I am so thankful for the love and support from all the people who have been a part of my journey. I can’t wait to be coached by the amazing staff at Brigham Young University, and be a part of the team!!! #gocougs 💙

What is very amazing for the Barcello family, is that Amanda will now be joining her brother Alex Barcello at the BYU program. Alex Barcello started last season for BYU and had a major impact on the program, after beginning his career at the University of Arizona, before transferring to BYU. Alex is one of the state of Arizona's most heralded basketball talents to ever grace the Arizona high school basketball hardwood.

Sister Julia Barcello was also a very decorated high school basketball performer, and, after a tremendous career at Seton Catholic herself, went on to finish her college basketball career at Colgate University. Sarah Barcello also had a tremendous career at Seton Catholic, before signing with Marist University, where she is now entering her junior season, after  making (21) starts as a sophomore, and averaging very good numbers.

Father Edward Barcello is also one of the elite players to ever play in Arizona high school basketball. Edward led the state in scoring his senior season at Brophy Prep in 1987, and graduated with more than 1,000 career points - second only to future Duke star forward and NBA player Mark Alarie (1982) as the school's all-time leading scorer.

Wife and mother Shelli Barcello was also the leading rebounder and the second-leading scorer during her terrific career at Tucson's Canyon del Oro High School.

Edward Barcello had this to say regarding his latest daughter Amanda's amazing accomplishment:

"Shelli and I are completely blessed that all four of our children have Division-I scholarships and don't have to pay a cent for college, and, most importantly, are receiving a fantastic education," said Edward Barcello. "We have been completely blessed with all the success, on and off the court. They are all (4) great students and have won (10) state titles. Amanda has a very good chance to win her third state title this year, and 11th for the family."

It is almost mind-boggling and overwhelming to think of a family having so much success on and of the basketball court. With so much success already coming from the Barcello family, Amanda Barcello still has yet to finish her senior season and high school career, and has another opportunity to add to the Barcello family list of accomplishments, as well as the historic coaching career of Karen Self, who has set the standard for girl's high school basketball in the state of Arizona.

Amanda Barcello is a skilled guard prospect that has very good versatility as a player, and is able to play several positions on the floor. She is a very good shooter of the basketball with range on her shot, and is also a strong driver and finisher with the ball. She is a very good ball handler and passer, and should be able to play both guard positions on the floor in college. Also a strong rebounder for her size and a gritty performer defensively, Amanda is a solid all-around prospect for the future.

Last season as a junior, Barcello averaged 9.8 points, 8.1 rebounds and 3.1 steals per/contest, while helping lead her team to an impressive 26-3 overall record on the season and a 4A State Championship, after defeating a talented Sahuaro HS team, 70-40, in the state final. Barcello will look to raise her numbers as a senior, and lead a very talented Seton group this up-coming season that returns everyone from last year's state championship group.

Congratulations to Edward and Shelli Barcello on another amazing accomplishment for their family, as well as Karen Self and the Seton Catholic program on another college commitment. Also congratulations to the Arizona Select girl's club basketball program on another girl's commit, and congrats to Amanda on this tremendous achievement. Well wishes to her in her senior season and we wish her excellence in her future at BYU.