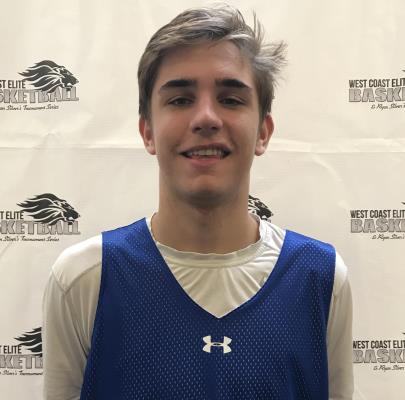 In a recent narrow loss to Orange Lutheran High School (CA) (76-74) in the Visit Mesa.com Basketball Challenge over the winter break, Bryan had his best game of high school career, when he exploded for a game-high 29 points in his team's defeat.  Bryan shot the ball extremely well from the field, from mid-range, three-point distance and from even longer ranges.  Bryan also defended and rebounded well in the contest - showing an advanced level of confidence in his team's defeat.  Bryan's play will be something that will really benefit his team for the second half of the high school season.

The Chaparral team is loaded with talent, but has been up and down this high school season.  Bryan will be a major key for the team's success during the second half of the season, as he is a very versatile performer that can score inside and out, competes and also is a very good team player that enjoys passing the ball to the open man on the floor.

What Bryan does best is stretch the floor with his perimeter shooting, which allows for his teammates to make plays off the dribble.  Bryan has a quick release on his shot, and is able to get it off with ease, which allows for him to be very effective.  As a result of Bryan's ability to shoot the basketball, if he can stay consistent, this Chaparral team should be able to make a nice run during the second half of the season.

Bryan also has the ability to play inside and out - something this team needs.  He is a good rebounder and also can defend post players, as well as defend on the perimeter.  When Bryan plays with passion on the defensive end and on the glass, it helps this team go.

I caught up with Bryan recently, and he advised me that there are things he would like to focus on to help ignite his team.

"I really want to focus on getting more rebounds and talking more on defense," said Bryan.  "My team lacks both of those, so I hope if the guys start to see me doing it more, then they will follow."

Currently, Bryan is hearing from such programs as Duquesne, Nebraska-Omaha, Princeton, Darmouth and MIT, but I look for him to generate much more interest over the next year, as a result of his size, skill level and high academic performance.

Behind the play of Bryan and also 6-foot-3 junior guard Blaise Threatt, 6-foot-4 sophomore guard Xavier Dusell and 6-foot-3 sophomore guard Alem Huseinovic, I look for this Chaparral team to begin to put it all together this season, and become one of the surprise teams in the state - making a strong playoff run in the state's 5A Division.