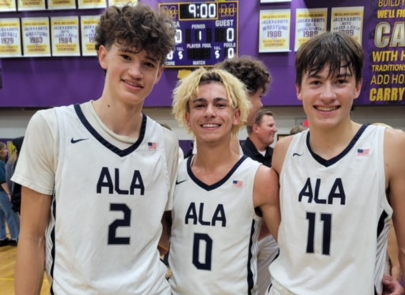 Mesa Fear The Hop Tournament - It was an exciting week of pre-season basketball action around the state, and the Mesa Fear The Hop Tournament was as exciting as ever, as the week was filled with top performances, led by two programs - ALA Gilbert North and Desert Mountain High School. Both teams stormed their way to the tournament's final game on Saturday evening, making for a terrific Tournament Final between two of the state's top up-and-coming programs. These two talented groups would face off in front of a nice crowd of fans, supporters and media on Saturday evening at Mesa High School, and would not disappoint, as the game would come down to the final seconds - resulting in a nice 76-73 championship victory for ALA Gilbert North.

ALA Gilbert North (American Leadership Academy) would be led in the victory, and throughout the tournament by the Tournament MVP, 6-foot sophomore point guard Dylan Novak, who would finish with a game-high 31 points in the win. Novak was terrific all week, as he led his team to several big wins, including a big first round victory over host Mesa High School. Novak and his teammates had absolutely no fear in this event, and proved to the state that they are for real, and will definitely be one of the favorites this high school season to compete for a 4A State Title. Novak proved that he is definitely one of the state's elite guard prospects in Arizona's 2025 Class in the process, as he already has an offer from University of Illinois-Chicago.

In the victory, ALA Gilbert North would overcome a big 47-35 halftime deficit to win the contest, as the "House Twins," 6-foot-2 freshman guard Kalek House and 6-foot-3 freshman guard Kaden House would come out on fire in the first half, and lead their team to a strong first half performance. The House Twins and their teammates, led by the sharp shooting of 6-foot-1 senior guard Zach Anderson, would look amazing in the first half, but ALA Gilbert North Head Coach Dave Novak and his staff would make some nice adjustments at halftime to get back into the contest.

Early in the second period, with 7 minutes left to play, Kaden House, who was absolutely on fire in the first half, would cruise down the middle of the lane and throw down a monster one-handed dunk over an ALA defender - soaring over the defender and bringing down the house. The game would definitely look under control for Desert Mountain at that point.

But ALA Gilbert North would come back with fire in the second half, behind the play of Dylan Novak, outscoring Desert Mountain 21-12 in the third period, to make the score 59-56, a three-point advantage for Desert Mountain, heading in the fourth period. With 4:13 left to play in the third period, Novak would knock down a long, contested three-pointer to tie the score at 51 all.

ALA Gilbert would take their first lead of the game early in the fourth period, with 7:25 left to play, after a nice layup in transition from 6-foot-6 talented junior Owen Bell.

After a 3-pointer from the corner by Zach Anderson, Desert Mountain would jump back out to a 66-62 advantage with 6 minutes remaining.

ALA Gilbert North would then come up big late in the game, as another three-pointer from Andrus would bring ALA to within one-point of Desert Mountain, 73-72, with 2:16 remaining. Then a driving layup from Novak with 1:20 left in the game would give ALA a 74-73, one-point lead late in the game, which, after several missed shot attempts by Desert Mountain, would lead to a nice 76-73 Championship victory for ALA Gilbert North.

Dylan Novak would finish with a game-high 31 points in the win, while Owen Bell would contribute 15 points, and 6-foot-3 senior forward Spencer Ferguson would contribute 12 points. The House Twins were terrific in the loss, as they combined for 45 points, as Kaden House finished with a team-high 23 points and Kalek House would finish with 22 points.

Congratulations to the ALA Gilbert North program and their coaching staff on this nice Tournament win, and also to the Desert Mountain program on an amazing tournament performance. There were no losers in this game.