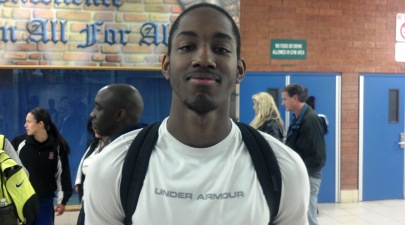 Many of the state's top-rated prospects in Arizona's 2013 senior class are still on the recruiting table - looking for future destinations for themselves.  One of these players is Westview High School's 6-foot-6, 185-pound unsigned senior forward Airen Randolph.  Randolph saw his game improve a great deal from his junior season and played himself into a solid senior season during the 2012-2013 high school basketball season.

Randolph teamed up with nationally ranked and ultra-talented 2014 prospect Andre Adams this season, and helped Adams lead Westview to a 21-8 overall record on the season, before falling to Cienega HS in the Division-I state playoffs.

While Randolph's numbers were not huge this past season, his impact on the game are not told by his statistics.  Randolph averaged 9.7 points and 6 rebounds per/game this season - almost identical numbers to his performance during his junior season.

Randolph showed much more assertiveness offensively this season and played with much more confidence on the basketball court.  Capable of defending several positions on the floor and possessing a 7-foot wingspan for his 6-6 frame, Randolph has the potential and upside to make me believe that his best years are well ahead of him.  Still growing physically a great deal, as Randolph adds some size to his very thin frame, you will see a much different player - one that should develop nicely over time.

Currently for Randolph, he advised me that he is still considering his options for college, but that he is definitely headed to a junior college for his future.  Randolph advised me that he currently does not have a passing test score on the college entrance examination.  In fact, he has not taken the ACT/SAT as of yet.

"I don't have the money to pay to take the test," Randolph told me recently - a very unfortunate fact about Randolph's living situation.  Currently Randolph lives with his high school teammate Andre Adams, and does not have much financial support.

For Randolph, his best days are well ahead of him.  It currently looks as though he made be headed to Glendale JC, but only time will tell where he will land for the future.

Randolph is a skilled wing prospect that has improved his ball handling and ability to make plays for himself and others.  He is a solid finisher and should improve in this area a great deal over time with more strength physically.  He is a solid shooter with range out to three-point distance, but he is still not very consistent from longer ranges and needs to put the time in the gym to become a consistent threat from mid-range.  He has a solid shooting stroke but simply needs more reps to become more comfortable shooting the basketball.

Randolph is still a bit of a project as a player right now, but this is one player that in two years we could all be talking about if he will work hard on and off the court to become the player that his length and athleticism suggests.  There are very few players with his combination of size and tremendous length.  He has the potential to become a serious player.

I will keep an eye on this unsigned senior prospect in the future, depending on which junior college program he lands at.  He is also a very nice young man with a nice smile and demeanor.  Someone that you want to root for.