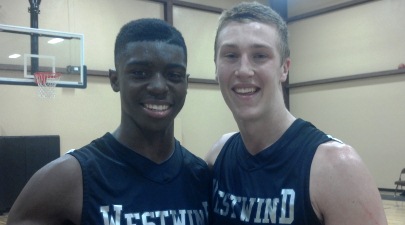 With the start to the 2013-2014 high school basketball season upon us next week, the season looks a lot different now than it did last week.  While the season already seemed to be a very exciting one, it just got much more exciting as the Arizona Interscholastic Association (AIA) did the right thing this week, and overturned their previous ruling - permitting South Mountain High School's top-rated 2014 Arizona prospect, 6-foot-8 senior forward Zylan Cheatham (San Diego State signee) and Corona Del Sol's bruising 6-foot-9 senior post Connor MacDougall (Arizona State signee) to be able to play this high school season.

Cheatham and MacDougall played last season for Westwind Prep Academy, but both were ruled ineligible by the AIA after leaving the program and returning to AIA member high school programs.  For Cheatham, it would be a return to his original high school program that he left for Westwind Prep, while for MacDougall, it would be an opportunity to enroll with his best friend, Casey Benson, and also his club teammates for the Arizona Power program.

Westwind Prep Academy had also recently had their academics from last school year ruled academically ineligible by NCAA standards. he school has been working hard to gain accreditation.

Cheatham told Rivals.com, "I was nervous going into it because my mom had to work so I was there all on my own," Cheatham said.  "But I thought I represented myself really well.  I just told the truth, spoke eloquently and it all worked out."

With the addition of MacDougall to an already very loaded 2-time defending Division-I state championship team, the Aztecs will look to definitely be the hands-down favorite to win another state title - their third consecutive state championship.  Corona is led by the play of 6-foot-3 senior point guard and University of Oregon signee, Casey Benson, and also skilled 6-foot-6 junior guard/forward and University of New Mexico commit Dane Kuiper.

South Mountain HS immediately becomes a serious contender in the Division-II Class in the state.  The addition of Cheatham for the Jaguars makes them an instant competitor for the D-II state title this season.  The unique talent of Cheatham is good enough and difficult enough for opposition to slow down or defend, that South Mountain will be in every game this season, and could be good enough to win it all.

Cheatham recently signed with San Diego State University - helping the Aztecs to one of the top recruiting classes in America for 2014.