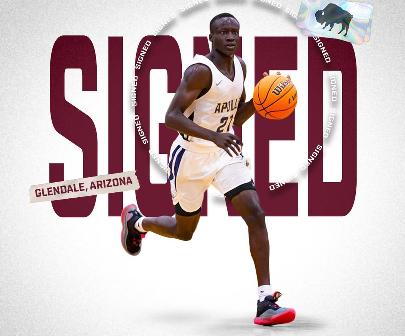 This week, Apollo High School's terrific senior guard Ahamed Mohamed announced that he had found his college home - deciding to sign with West Texas A&M, one of the top Division-II programs in the country. Mohamed had an excellent high school career, capped off by a stellar senior season in which he poured in serious numbers and did all he could to help his Hawks win - every night. One of my favorite players and student-athletes in the West, Mohamed was more than well deserving of many college offers, and in the end, he found a program that appreciates his unique level of talent.

Mohamed really helped himself in our new Spring Player Rankings, after posting a tremendous senior season for himself, and moved up nicely in our new rankings. The season was highlighted by an amazing 61-point performance this season that set a school record in his team's win over Williams Field HS. Mohamed averaged 26.4 points, 5.8 rebounds, 2.9 assists and 2.4 steals per/game in his final senior season.

Mohamed plays with excellent energy and always seems to be in an athletic stance on the court. While he can definitely score the basketball with the best of them as a point guard, we have also seen Mohamed run a team efficiently and provide leadership and facilitate from the position quite nicely. He is a complete guard on both ends of the floor, and is a capable lock-down defender at the college level.

Mohamed played his club basketball for legendary club coach Kenny Mullins and his always loaded Factory program, and competed and played at a high level each time I saw him play over the past several years.

Congratulations to Mohamed on this accomplishment for him and his family, as well as terrific Apollo High School Head Coach Jacob Marin and the Apollo basketball program. This young man has become one of my favorite prospects to come from the state of Arizona in some time.