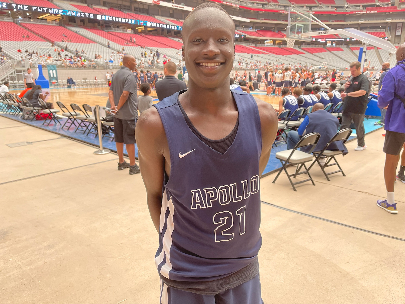 Another one of my favorite prospects that is also on the rise in Arizona's 2022 Class is Apollo High School's athletic and versatile 6-foot-1 rising senior guard Ahamed Mohamed. Mohamed is a serious talent that has had numerous strong performances when I have seen him compete, and will be a prospect on the rise in our next Player Rankings for Arizona Preps. College coaches are also beginning to take notice of the unique talent Mohamed has as a college prospect.

Mohamed has flown well below the recruiting radar for some time now, due to the COVID pandemic. As a result, his college recruitment has been slower than other top prospects, and, the fact that he is a guard, most college programs are not looking for him. But they will have to this summer, as this young man is a true sleeper prospect in the class, and can really help a college program. I understand his value as a player, and love this young man's potential for the future.

Months ago, I witnessed Mohamed's strong individual performance in the Pangos All-American Festival event organized by Dinos Trigonis at AZ Compass Prep. Mohamed was one of the top overall individual performers in the event, and proved his value as a point guard in the event, as he competed at a high level on both ends of the floor. He made shots consistently, found the open man on the floor consistently, got into the lane and finished, rebounded hard and locked up defensively. He absolutely does it all. Last weekend, in the first round of games for the Section 7 Event, Mohamed again impressed with a very similar performance, although with so many courts going on at the same time, many coaches may have missed him.

Currently, Mohamed possesses offers from Southern Utah, Portland State and Minot State. He is one of the most underrated guard prospects currently in the West, and an excellent sleeper prospect for a college program in search of such of talent. What makes Mohamed so unique is that he is always in an athletic stance and ready to make a play. He has a very high motor and competes on both ends of the floor. He also has an excellent attitude and is an excellent teammate - willing to do whatever it takes to win for his team and willing to give up his body.

Mohamed has played his club basketball for legendary club coach Kenny Mullins and his always loaded Factory program, and will compete during the NCAA July Evaluation Period with a very talented group of performers that should make a lot of noise on the circuit this summer.

I will continue to watch Mohamed closely this summer, and bring you more updates as they continue to develop. This young man has become one of my favorite prospects in Arizona's 2022 Class.