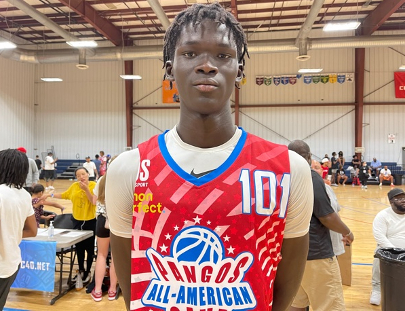 One prospect in the state of Arizona's 2022 Class that elite college programs need to take a hard look at, as I have stated for years now, is AZ Compass Prep's athletic and high-motor 7-foot senior post Adrame Diongue. Still uncommitted, Diongue flourished under the recruiting radar for some time, and is just beginning to see his college recruitment begin to take off, as many college programs have now extended offers to the elite post talent. Diongue is now one of the elite post talents in the country, and holding it down in the middle for the nation's #1 overall program.

Last season as a junior, and in his first year with AZ Compass Prep, Diongue was a force and helped the program to a #1 overall ranking in the country, alongside a loaded lineup of prospects that included Kentucky star guard Ty Ty Washington. Diongue played at a high level all season, and was tremendous late in the season, as the program came up just short of a national championship at the GEICO Nationals. Late in the season, and with very little size available for their national championship run, Diongue finished strong, rebounded hard and blocked shots for his program - proving his extreme value as a post player.

Diongue then was a bright spot last summer at the prestigious Pangos All-American Camp, which featured many of the nation's elite prospects and loads of size. Diongue proved that he is among the very best post talents around, and is activity and willingness to compete at a high level were glaring in the event. Diongue spent time last spring and summer with Belmont Shore (CA) and also the Oakland Soldiers (CA).

Since last season, and with his recruitment yet to take off, Diongue has reeled in a large number o Division-I offers for himself now, as he now possesses offers from Kansas, Texas, TCU, Illinois, Texas Tech, Creighton, Washington, Washington State, Mississippi State, Long Beach State, Western Kentucky, East Carolina and UC-Santa Barbara. While his list is growing, many programs are still missing the boat on this unique post prospect. A rare post talent like Diongue is worthy of many more offers, and should see many offers come his way throughout this prep season, especially on a very loaded AZ Compass Prep team who is currently the favorite to win a national championship this season.

Very rarely do you find someone of his size, length and agility, combined with a nice overall offensive skillset and a very high motor. His potential for the future and upside has me almost in amazement of just how good he can eventually become. He runs the floor like a guard and is agile for his size, which is so rare for 7-footers. He is still very thin physically, but has gotten much stronger over the past year and now finishes very strong at the rim and over defenders. He has superior upside and as he continues to mature physically and fills out his length, he will become a superior inside presence at the collegiate level. Like for most taller and lengthy post prospects, Diongue's best years are well ahead of him. He is already an absolute force defensively and blocks or changes many shots around the paint, where he has very good timing and keeps balls in play - leading to nice fast breaks for his teammates.

An African native, Diongue played his freshman season at Mount Zion Prep in Virginia, but chose to move to Arizona two summers ago (2019), to live with his uncle and guardian, former University of Arizona standout Mohammad Tangara. Tangara has been everything to Diongue, providing him with complete support in his transition from Africa just two years ago. As a sophomore, Diongue first attempted to play for Chaparral High School, but due to some erroneous transfer rules, which were very unclear by the AIA and Chaparral HS, Diongue would only be cleared to play for the program's junior varsity, but not the school's varsity team. As a result, Diongue attended classes at Chaparral for an opportunity to receive the excellent level of academics at the school, but then later decided to transfer to Bella Vista Prep, where he ultimately played his sophomore season and developed. Diongue then decided to transfer to AZ Compass Prep for his junior season.

Diongue is coming off another very strong showing in last weekend's AZ Compass Prep Hoops Classic, where he was dominant in leading #1 ranked AZ Compass to an undefeated record in the event. He proved in the event that he has really developed, as Diongue is a gym rat and loves to work on his craft and wants to become an elite-level prospect - an attribute that is essential among today's best prospects nationally.

I will continue to follow Diongue's college recruitment closely, as he does not seem to have any leaders in his recruitment currently, but this young man is well deserving of much more recruitment, as it is very difficult to find post players with his size and motor and willingness to work. This is an immediate contributor at the collegiate level. College coaches take notice.