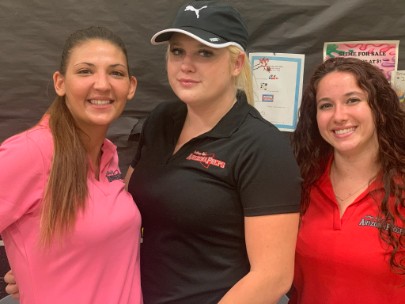 Over the past month, the Arizona Preps' staff has grown a great deal as the group has added some serious talent to an already very talented staff of writers, scouts and interns. As part of the group's development, we are proud to announce the addition of Addissen Stinnett (Pictured far right) to our staff. A native of Florence, Arizona, Addissen Stinnett will join the Arizona Preps' staff as a reporter to cover boys and girls basketball in the state.

Stinnett's role with the Arizona Preps' staff comes as an internship with the organization, as she will be interning as a reporter and journalist for the organization, while she looks to attend college in the near future. Arizona Preps' has had excellent success with our internship program over the years, and is honored to be able to provide such a program to desired interns, in an attempt to help them become successful in a career of sports management, journalism, and other desired majors. Interns earn college course credit with their respective college programs.

Past interns for Arizona Preps' include current University of Portland assistant coach Chris Buchanan. Buchanan interned with Arizona Preps' for (3) full years, before being offered a full-time assistant coach opportunity with the University of Portland and legendary NBA player and now Head Coach Terry Porter, where he now has a full-time paid position.

Addissen Stinnett is a wonderful addition to the Arizona Preps' staff and TEAM, and will be providing interviews of the state's top student-athletes on the Arizona Preps' Instagram and Twitter social media platforms. Her recent work while helping cover the Pangos Best of Arizona Summer League was terrific, as her first interviews of star guard Ty Ty Washington, rising star Nathaniel Knight and the ultra-athletic Devontes Cobbs were a big hit on social media platforms and very well done.

Stinnett has excellent energy and an approachable personality, combined with a great smile and atttitude, and we look forward to big things from her in the future!