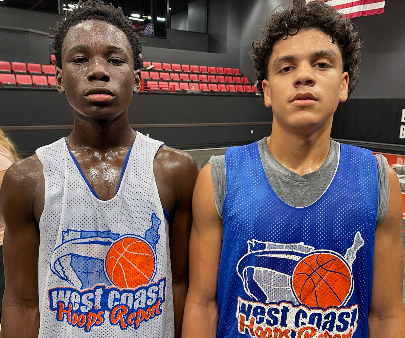 The Southwest Basketball Camp took place this week at The PHHACILITY and was organized by former Arizona Preps contributors Gregg Rosenberg and Justin Vargas. This event was the 5th annual installment of the camp and featured (60) different prospects from the state of Arizona, and some from outside of the state. The Arizona Preps' staff was in attendance throughout the event, and we will bring you our recap of the top overall performers from this week's event. Two top-rated young prospects stole the show throughout the event, and separated themselves in the Top 20 All-Star game on the final day (Tuesday evening). Eduprize Prep 6-foot-3 tough and skilled sophomore guard Adam Njie and St. Mary's High School's 6-foot-2 stellar sophomore floor general Styles Phipps separated themselves from the group, and earned CO-MVP honors for the camp.

Arizona basketball has gone to another level over the past several years, and the future looks very bright, as Njie and Phipps are two members of the state's 2024 Class, which seems to be more and more loaded by the week, as more prospects from the class continue to emerge.

Styles Phipps is already a well known 2024 prospect, after a freshman season where he helped lead St. Mary's High School to a 4A Division State Title. Phipps is already regarded as one of the elite overall prospects in America's 2024 Class, and is currently our #2 overall prospect in the class, but is fighting for our top overall spot, after a strong spring and summer showing that has elevated him nationally among his peers in the 2024 Class. Many college coaches, scouts and media have taken notice of Phipps, who is now another Arizona basketball prospect on the rise. Phipps is also well beyond his years as a basketball player and as a person.

Phipps is in a great position, literally, as he has a true position as a floor general from the point guard position. The ball is a string in his hands and he is almost a magician with the basketball. Phipps has put in countless hours of ball handling and practice for himself over the years, and it seriously shows in his approach to the game. He is difficult to defend as a result of being able to get anywhere he wants to on the floor. He almost toys with his defenders at times, which can be a blessing and a curse. Because Phipps can almost do what he wants, he will continue to develop when and what to do with the basketball, as the game simply comes easy to him. But not without the countless hours of hard work that he has put into his craft. Phipps is fundamentally sound and looks like he is having fun every time he plays, as a result.

Phipps has already earned offers from TCU, Western Illinois and Hampton University. With several offers on the table for himself already, it is just a matter of time for Phipps, as many offers will soon be pouring in for him, over time.

Adam Njie, on the other hand, is just beginning to make a big name for himself. A native of Brooklyn, New York, Njie is a warrior on the court that goes hard every trip down the floor and is always looking to make a play, Njie is hot and on the rise in the 2024 Class. While playing for Eduprize Prep as a freshman, the path for Njie has not been as immediate as the path for Phipps. Njie saw limited action as a freshman for Eduprize last season on The Grind Session, but has worked extremely hard on his game and has pushed his competition, as a result. Njie has excellent work ethic and a passion for the sport, and works on his craft daily, which has resulted in his extreme progression as a player.

Njie, while also a point guard prospect like Phipps, is much more of a pure scorer from the point guard position. He can create off the dribble at any time in the offense, and has the ability to score from anywhere on the floor, with a superb and strong handle of the ball, and a strong driving and finishing ability, combined with excellent body control. Njie has a nice shooting stroke with range, and he can shoot the basketball from the stand-still position on the floor or on the move. He has excelelnt body control in traffic, and superior physical strength in his upper and lower body, which allows him to overpower opposing guards. He plays with a high motor on both ends of the court, and is simply a problem for opposing defenders.

Like Phipps, Njie also possesses several offers early on in his college recruitment, as he has received Division-I offers from Utah State, Manhattan and Florida International. Expect Njie to also receive loads of Division-I offers over time.

These two young men are two of our state's elite 2024 prospects, and I look forward to watching them continue to develop over time, as they both have excellent futures ahead of them.