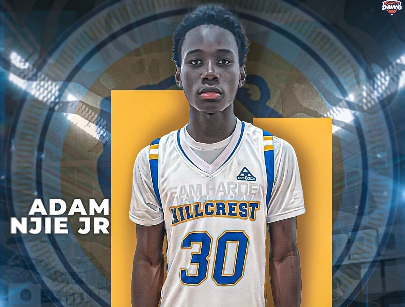 One of the top overall guard prospects in the state and also one of the elite 2024 prospects in the country, 6-foot-3 tough and skilled sophomore guard Adam Njie has found a new home, after leaving the Eduprize Prep basketball program. Njie has landed at Hillcrest Prep and will add to an already very loaded roster of prospects, after Eduprize decided to not have a National Prep Team this prep season.

I caught up with Eduprize Prep Head Coach and Director of Operations Christian Polk, and he advised me that the program has decided to step down from The Grind Session this season, and will just have a high school program to the school's credit, as a result. Eduprize competed on The Grind Session last season and had some success, but will just compete in the Canyon Athletic Association (CAA) this season. Eduprize Prep's season last year was highlighted by the play of former guard Justus Jackson, who transferred from Millennium High School after his junior season. The program had a key win over then nationally ranked Prolific Prep (CA) last season, after Jackson poured in more than 40+ points in the win.

Njie's decision to move to Hillcrest was primarily induced due to the cancellation of Eduprize's National Team. Polk has a tremendous relationship with Njie, who he has helped to develop throughout his young career. The two are very close. Polk will also look to help his other prospects land a home for the prep season.

For Njie, the move will be welcomed, as he will now team up with a loaded roster of college prospects, in preparation for a big junior season for himself. He will team up with such top-rated talents as 6-foot-10 senior post Duke Brennan (Arizona State commit), 6-foot-8 senior Kamari Lands, 6-foot-9 sophomore Jason Asemota and 6-foot-6 junior Shawn Simmons Jr., among others.

After a recent MVP performance in this summer's Southwest Basketball Camp organized by Gregg Rosenberg and Justin Vargas, Njie then followed up his MVP performance with another MVP performance, but this time on the regional stage, as he was selected as the Co-Tournament Most Valuable Player @ the prestigious Pangos All-West Frosh/Soph Camp for the Top 30 All-Star Game.

Njie already possesses several offers early on in his college recruitment, as he has received Division-I offers from TCU, Utah State, Robert Morris, St. Francis, Manhattan and Florida International. Expect Njie to now receive many more Division-I offers over time, as a result of his recent exploits, and also landing at the highly-recruited Hillcrest Prep program.

A native of Brooklyn, New York, Njie is a warrior on the court that goes hard every trip down the floor and is always looking to make a play. While he saw limited action as a freshman for Eduprize last season on The Grind Session, he has worked extremely hard on his game and has pushed his competition, as a result. Njie has excellent work ethic and a passion for the sport, and works on his craft daily, which has resulted in his extreme progression as a player.

Njie, while a point guard prospect, is much more of a pure scorer from the point guard position. He can create off the dribble at any time in the offense, and has the ability to score from anywhere on the floor, with a superb and strong handle of the ball, and a strong driving and finishing ability, combined with excellent body control. Njie has a nice shooting stroke with range, and he can shoot the basketball from the stand-still position on the floor or on the move. He has excellent body control in traffic, and superior physical strength in his upper and lower body, which allows him to overpower opposing guards. He plays with a high motor on both ends of the court, and is simply a problem for opposing defenders.

Njie is now regarded as one of the very best guards in all of the state, regardless of class, so his bright future will now pick up for a talented and loaded Hillcrest Prep program. I will continue to follow his recruitment closely, and bring you any updates as they continue to develop.