Adam Njie Goes To Another Level 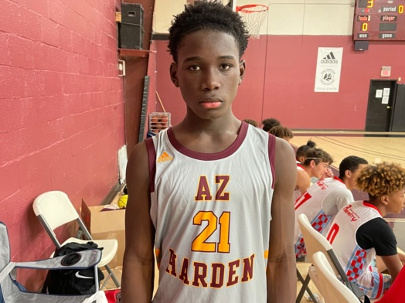 After a recent MVP performance in this summer's Southwest Basketball Camp organized by Gregg Rosenberg and Justin Vargas, Eduprize Prep's 6-foot-3 tough and skilled sophomore guard Adam Njie has now gone to another level. Recently, Njie followed up his MVP performance with another MVP performance, but this time on the regional stage, as he was selected as the Co-Tournament Most Valuable Player @ the prestigious Pangos All-West Frosh/Soph Camp for the Top 30 All-Star Game. This amazing performance in Southern California has now catapulted Njie to another level, and has him regarded as one of the top 2024 prospects in the country by the many scouts and media in attendance at the event.

The high-scoring and aggressive Njie would score an impressive game-high 29 points (23 in 1st half) to lead his White Team to a 112-99 victory in the Cream of the Crop Top 30 All-Star game - a feat that would make a major statement for Njie, who will be returning for his sophomore season this year to lead Eduprize Prep on The Grind Session. While the team lost numerous players from last year's team, Njie is a major bright spot for the program.

Njie already possesses several offers early on in his college recruitment, as he has received Division-I offers from Utah State, Manhattan and Florida International. Expect Njie to now receive many more Division-I offers over time, as a result of his recent exploits.

A native of Brooklyn, New York, Njie is a warrior on the court that goes hard every trip down the floor and is always looking to make a play. While he saw limited action as a freshman for Eduprize last season on The Grind Session, he has worked extremely hard on his game and has pushed his competition, as a result. Njie has excellent work ethic and a passion for the sport, and works on his craft daily, which has resulted in his extreme progression as a player.

Njie, while a point guard prospect, is much more of a pure scorer from the point guard position. He can create off the dribble at any time in the offense, and has the ability to score from anywhere on the floor, with a superb and strong handle of the ball, and a strong driving and finishing ability, combined with excellent body control. Njie has a nice shooting stroke with range, and he can shoot the basketball from the stand-still position on the floor or on the move. He has excellent body control in traffic, and superior physical strength in his upper and lower body, which allows him to overpower opposing guards. He plays with a high motor on both ends of the court, and is simply a problem for opposing defenders.

It will be very interesting to see which college programs now look to get involved with Njie early on in his recruitment. Especially since several college programs have already extended offers. I will continue to follow this young man closely, to watch his continued development as a player and college prospect, and bring you any updates as they continue to develop.

Notes: Also being selected among the Top 30 All-Stars in the event and participating in the Cream of the Crop Top 30 All-Star game were St. Mary's High School's stud sophomore guard Styles Phipps, and also Raymond S. Kellis 6-foot-6 sophomore forward Jai Anthoni Bearden - two of the elite 2024 prospects in the state of Arizona, and in the country.

Bearden is a sure-fire Division-I athletic talent with a nice overall skill level. Bearden has already received one offer from the University of Portland.