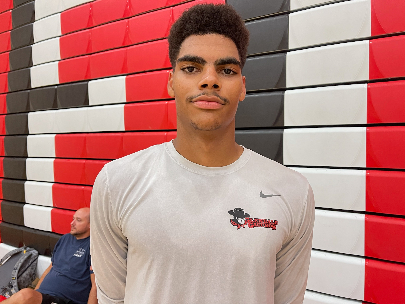 While it is still very unclear as to who will be on each roster for junior college programs this season in the ACCAC, one thing is clear, Glendale Junior College 6-foot-9 sophomore post Adam Hamilton will be our top returning sophomore prospect in the conference this season. After a strong performance during his freshman, where he helped lead his Glendale JC program to a ACCAC Division-II Region Championship, and sitting out last season, Hamilton returns in his third year at Glendale JC for his sophomore season, and will look to pick up his college recruitment where it left off. In many cases, it has never picked up or even taken off, as Hamilton will become one of the hottest junior college recruits in the West this season.

Last season, after the cancellation of the National Division-II Tournament, the ACCAC would also elect to cancel the junior college season for all Maricopa County college programs. Glendale JC has not played in more than a year and has not had the opportunity to defend their previous Conference Title or repeat as Champions. They will look to defend it now, more than a year later.

Glendale's top-rated prospect, Adam Hamilton, would surely miss out on the previous National Tournament experience, which could have boosted his college recruitment a great deal, and benefited him and his team through the experience. Among the ACCAC's top overall prospects then, and now the top returning sophomore prospect in the conference, Hamilton has developed immensely since his Buckeye High School days, where he was an integral part of a dominant high school team (2018-2019). Now, almost (3) years later since graduating from Buckeye, Hamilton has grown several inches and is entering his sophomore season. Already an academic qualifier out of high school, Hamilton is still only a mere 19 years of age, as he entered college extremely young as a college prospect. The year off last season has helped Hamilton, which gave him another year or so to mature physically, and catch up (in age) to his older competition in the ACCAC.

As a result of missing out on competition, Hamilton has soared well below the recruiting radar, and currently possesses two offers for himself from Florida International and Northern Arizona. His college recruitment should absolutely explode this junior college season, as he is a superb prospect that has excellent size and length to go with a nice overall skillset. The time off from competition in the ACCAC has definitely cost Hamilton loads of recruitment and exposure, but he is primed and ready to have a big sophomore campaign.

"It is all about fit," said Hamilton. "I don't want to go somewhere just because of the name of the school. I want to go where I am wanted the most, and will play."

Hamilton is well under recruited currently, and the current offers he has came some time ago, so may not even currently exist, according to his Head Coach Ken Carrillo. Carrillo realizes what he has in Hamilton, and also believes that this young man is a superb talent that has really worked hard, and improved a great deal during his time at the junior college program.

Hamilton advised me that while people had advised him to go prep out of high school, his experiences at the junior college have been very favorable for him, and has really helped him to develop and mature mentally and physically.

Hamilton is a rare find for his size, as he can play inside and out and has a large and lengthy frame, which allows him to block and change shots, and also finish strong around the paint. He runs the floor like a guard and has excellent versatility as a player. While he needs to gain more consistency on his shot from longer ranges, Hamilton has a nice mid-range jump shot, and is also able to put the ball on the floor and make aggressive plays at the rim and around the paint. He is currently a stretch 4-man, that will be able to develop as a 3/4 over time, with more maturity and development as a player. His upside is glaring and he is also a fine young man with an excellent approach to the game, and a fine personality. He will make a Division-I college program proud and should be able to make an immediate impact, as he has been out of high school for almost (3) years, while still only being 19 years of age.

While our staff and myself have not seen what is actually out there currently in the juco ranks, regardless of the competition, Hamilton is a serious juco prospect that will have college programs intrigued, once they see him perform. Seldom do you see a juco prospect that has improved as much as Hamilton has during his tenure at Glendale JC. He has grown significantly mentally and, of course, physically, and now is a top-rated juco prospect that will benefit a great deal from his development - a nice lesson for today's student-athletes that have goals to play at 4-year college programs.

The experience gained by Hamilton through being coached by a former Division-I coach daily, winning a Region Championship, and playing considerable minutes against top juco competition will be invaluable in his pursuit to play at the next level, and will allow him to make a strong transition to the Division-I level.

I will continue to follow the development, and, ultimately, the college recruitment of Hamilton, and bring you updates as they begin to develop.