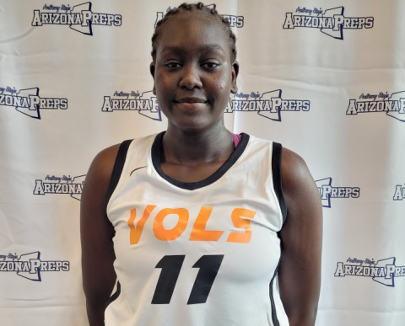 Girls basketball in the state of Arizona is consistently on the rise, and, as a result, there are numerous prospects emerging in the state, as more prep schools develop and club basketball becomes more prevalent. Southern Arizona Prep is a newly developed prep school in Tucson, Arizona, and the program is on the rise quickly in the state for girls and boys basketball. After participating in this year's recent Arizona Preps Fall Showcase, I had the opportunity to evaluate and observe another big-time future talent in our state - 6-foot-7 junior post Achol Magot. Magot emerged from this year's event, and is a promising prospect for the future.

Magot is a rare find among post players in the country, as she has excellent physical size and runs the floor hard and has good overall agility for her size. She has solid hands and feet and is still growing a great deal into her large frame, so she has some serious upside for the future. She rebounds hard and plays with good intensity and aggression. While she is still raw offensively, she is developing a great deal and plays her position, as a true post player that plays big.

Magot's size alone is very impressive and makes her a serious Division-I prospect. The fact that she runs the floor very well and can catch the ball and finish strong around the basket, and in transition is very intriguing, and suggests for me that she can potentially become a high major Division-I prospect over time. She may need a stint in junior college before moving on to the Division-I level. If she does make that move, sky will be the limit for her in her development as a college prospect.

I look forward to watching Magot continue to develop over the next two years, as she is a serious recruiting target for Division-I programs to take a very hard look at, and has a very bright future ahead of her.