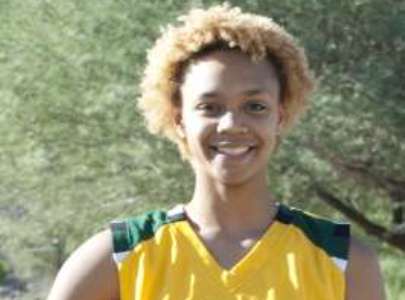 Central Arizona JC 6-foot-3 sophomore Joymesia Howard scored from all over the court in this weekend's ACCAC JUCO Jamboree for women. Howard was one of the most effective scorers of the basketball around the basket on the day and looks to help lead CAC back to another conference championship.
Share
Facebook Twitter LinkedIn WhatsApp Pinterest Email

On Saturday, October 5th, the annual ACCAC Women’s Basketball Jamboree took place at the Avondale Sports Complex.  This event serves as a very good pre-cursor to the upcoming 2013-2014 season.  Every team that competes in the ACCAC, played at least two games and the majority of those games were very even matches.  It was very clear that all of these teams played at a very high level for so early in the season.  It looks to be a very competitive up-and-coming season for all of these talent-filled teams.  It will be an interesting battle all season for the top of the standings.

Of all of the games I personally watched, here are my top 5 performers of the day . . .

Shea Brown: 6’4” SO, F, Central (Coolidge) Arizona College:  Brown was the most dominant and powerful player of the day, and could be the best player in the whole ACCAC conference.  At 6-4, she was a physical force at both ends of the court all day long, and did whatever she wanted when she was in the game.  She was a strong rebounder on both the offensive and defensive end of the court.  Brown also altered a majority of the shots that came her way - resulting in low percentage shots for the others teams.  On the offensive end, she was extremely efficient on the block with her back to the basket.  She went up very strong on every take, and was able to draw fouls on many of her shot attempts.  Most notable was her ability to step up and frequently and successfully shoot the three in transition.  Brown was a very impressive prospect and I am excited to see how she progresses this season.

Joymesia Howard: 6’3” SO, F, Central (Coolidge) Arizona College:  While Brown scored from all over the court, Howard was one of the most effective scorers of the basketball around the basket.  She was very strong down low and had a unique way of putting herself in a great position to score the ball, by sealing off defenders with her frame and getting to the foul line.  She also was a solid shot-blocker and had great defensive reads on the court.  She picked off many passes by having her hand in the passing lane and was alert at all times.  Howard and Brown are possibly the best front-court duo in the ACCAC, and alone could lead CAC to a first place finish in the conference - once again.

Chantal Thomas: 5’6” FR, PG, Arizona (Yuma) Western College:  Thomas is the heart and soul of her Arizona Western team and she makes the team go.  The Philadelphia native was also one of the quickest and most athletic point guards that I saw on the day as well.  Although she may need to develop her overall shooting of the basketball, she makes up for it with a very solid handle on the ball.  She can split traps and quickly push the ball in transition to score quick baskets and set up her teammates. She is also hard-nosed once she gets into the lane, and she can be a duel threat by scoring the ball, or dishing out to a shooter or dropping the ball into a post player.  Thomas is a very impressive point guard in the ACCAC, and should have a very productive season both for herself and her Arizona Western team.

Shaylin Heredia: 5’7” SO, PG, Scottsdale Community College:  Heredia was one of the best shooters of the ball that I saw all day long.  She got a majority of her shots in transition, but could also spot up and run off screens to hit her shots as well. She also is a very strong drive-and-kick point guard.  She was able to get her teammates, especially the shooters, involved as she broke down the opposing defense and hit her players for the open shot.  Defensively, her quick hands and defensive awareness caused turnovers that resulted in baskets for her team.  Heredia is another one of the solid point guard prospects in the ACCAC and should have a great season for the Artichokes.

Raja-Moreno-Ross: 5’11” SO, F, Pima (Tucson) Community College:  Moreno was the best driver of the basketball and one of the most productive scorers of the day.  Every time she has the ball in her hands, she is a threat to score at any time.  She uses a variety of quick and slippery moves to get by her defenders at will, and, once at the basket, scores at a very high rate.  She can also post up defenders and sticks with the play until she scores or gets fouled.  She did not miss a free-throw on the day. Moreno-Ross is one of the reasons that her Pima Community College team is a team to look out for in the up-coming season.  Expect Moreno-Ross to have a very productive year scoring the ball.