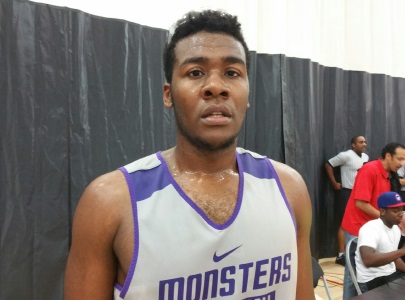 Here are my top sophomore prospects to watch for this season in the ACCAC . . .

A division-I transfer from Arizona State University, MacDougall looks as a high-major post player should look physically and he has the athleticism and toughness to go with it.  MacDougall runs the floor very well for his size and is a strong finisher on the low block.  He does not shy away from physical contact.  In fact, he relishes it and he uses his large physical frame to gain good inside post position and make plays inside the painted area.  A good scorer on the low block with a soft touch out to 15-18 feet.  Plays like a big and enjoys scoring around the basket.  Also a strong and active rebounder.  Runs the floor hard.  A  capapble shotblocker.  MacDougall is capable of playing either the 4 or 5 positions on the floor, although he is at his best as a four man, where he is able to use his quickness to create matchup problems for opposing low post defenders.  An excellent competitor that plays better against better competition.  Looks to be the best overall prospect in the conference this season.  Has already received scholarship offers from such programs as Nebraska, Kansas State, New Mexico, Cal-State Northridge, Portland, Portland State, Utah State, Northern Arizona and Saint Mary's.

A native of Indiana, Lands (pictured) will be one of the elite overall performers and prospects in the conference this season.  After a strong freshman campaign last season, Lands will return to have a big sophomore season. Lands is a rare find - a big, wide-body combo-forward prospect with a nice overall skillset and an ability to make plays inside and outside on the perimeter.  Plays very physical and enjoys physical contact.  A good shooter with range on his shot and also a good mid-range game.  A good low-post player with good offensive moves and footwork.  An active rebounder.  Runs the floor well.  A good ball handler and passer.  A very underrated prospect.  Currently has offers from Texas State and Loyola-Chicago.

A native of Oakland, CA and a division-I transfer from the University of Cincinnati.  Strickland is a big, wide-body post player with a long wingspan and a knack for scoring in the post.  He has good low post moves and solid low-post footwork.  A good finisher inside that gets to the free-throw line quite often and enjoys physical contact.  A left hander, Strickland has a soft touch around the basket and is able to step outside and shoot the basketball out to 15-18 feet.  An active rebounder and a good shotblocker.  Runs the floor but does need to continue to get into better shape physically.  A nice looking post prospect and one of the top overall prospects in the conference.

Young is an athletically gifted wing prospect with a nice shooting stroke with excellent range on his shot.  Young has a nice overall fundamental skillset that allows him to make offensive plays from almost anywhere on the floor.  A nice slasher and finisher in traffic.  Very good open court player.  An active rebounder with nice athleticism.  Active defender that plays passing lanes.  Good ball handler and passer.  Good looking prospect.

Bingham is a good-looking post prospect with excellent size and length.  He has worked hard since high school to make himself into a player, and, as a result, he has developed nicely into a serious recruiting target for many college programs.  What level of college will greatly depend on his sophomore peformance this season, but Bingham definitely looks the part.  A well coached post player that rebounds hard and runs the floor.  A good low post scorer that rarely looks to score but is a good finisher inside the paint.  Does not do much outside the paint offensively.  A good shotblocker.  Good passer out of the low post.  A good low-post prospect that is a winner.

A very strong, well-built guard prospect with an excellent body for his size.  He has excellent body control and is a strong finisher around the basket.  A good scorer and open court player.  A good shooter with range.  A good ball handler and passer.  Very athletic.  A very good defender.  Active rebounder.  Will have a big season.

Rideau is a long and lean combo forward with a nice overall skill level, allowing him to play inside and out.  As a result of his thin frame, Rideau likes to play on the perimeter much more often than inside the paint.  His length and size does allow him to make plays around the basket.  Good mid-range shooter with a good jump hook.  Solid rebounder.  OK passer.  Solid defender.  Runs the floor well.

Simpson is an undersized power forward that gets a lot done on both ends of the floor and gives his team all he has physically.  An athletic four-man that is able to score around the basket with good quickness and good low-post footwork.  He is also able to step outside and shoot the basketball with range on his shot - out to three-point distance.  A strong finisher at the basket.  An active rebounder on both ends of the floor, and plays bigger than his size suggests.  A good defender.  Plays with excellent intensity.  Runs the floor hard.  A good sleeper prospect.

Hennings is an electric point guard prospect with a high motor and an ability to make plays at a high level for his team.  A floor general, Hennings is an excellent ball handler and passer that sees the floor and pushes the ball hard.  He is a very good shooter with excellent range on his shot, and is able to get into the lane and make plays for hismelf and his teammmates.  Good finisher.  Excellent defender with excellent lateral quickness.

Molesworth is a very good looking 4-man prospect with very good size and a nice overall skill level.  He can play either with his back to the basket or score from mid-range, while catching and facing the basket.  He has a very good body and uses it well to make plays inside the paint.  He is a mis-match for many opposing post players.  An active rebounder.  Good low post defender.  Good passer.  Runs the floor.  A good sleeper prospect.

Claiborne will be a major factor for the success of the South Mountain team this season, as he spreads the floor with his ability to shoot the basketball with very nice range.  He has a quick release and can get hot in a hurry.  He also has a very good mid-range game and has a live body, when he is in a rhythm.  He is a good slasher and open court player.  A good ball handler and passer.  An active rebounder.  Good defender that plays passing lanes.  A good sleeper prospect.

Davis is a nice combo-guard prospect that is capable of playing the point guard position full time if needed.  A left-hander, Davis is a strong penetrator and finisher at the basket and is capable of getting into the lane and creating plays for others off the dribble.  He is also a very good shooter and has some range on his shot.  He has good quickness with the basketball and pushes the basketball up the floor to the open man.  Has good court vision and likes to make the pass.  Has very good lateral quickness defensively and is a very good on-the-ball defender.  Great attitude on and off the floor with a nice smile and has very good body language.  A good sleeper prospect.

White is a combo-guard prospect with a nice all-around offensive skillset.  A left hander, White is an athletic guard that has a knack for scoring the basketball.  He is always around the basketball and is a very good slasher and open court player.  He is also a very good finisher and scores well in traffic.  A good ball handler and passer that looks to push the ball up the floor to the open man. White is a good shooter of the basketball with range, but is at his best from mid-range where he likes to score off the dribble.  He is very active, making him a very good rebounder on both ends of the floor. He plays with very good aggression and rebounds outside of his area, which he likes to do to start his team's fastbreak.  White is also a very good defender, and is not afraid to guard the opposing team's best player - which he can be found doing quite often.  He has very good lateral quickness and enjoys playing defense - a nice attribute.  A solid college prospect in many facets.

Davis is a big guard prospect with an excellent shooting stroke with unlimited range on his shot.  Possibly the best shooter in the conference this season.  Davis has a quick release and does not need much room to get it off.  He also shoots a very high percentage from three-point distance.  Davis is a very good teammate and a winner, and enjoys making the extra pass to the open man on the floor.  A good ball handler and passer that sees the floor.  A good rebounder.  Solid defender.  Good prospect.

Tuggle returns to the junior college ranks after a long stint outside of organized college athletics.  Tuggle once attended Westwind Prep Academy, where he competed with NBA talents Tony Snell (Chicago Bulls) and Jamaal Franklin (Oklahoma City Thunder).  Tuggle failed to qualify academically, and also found it difficult to play in college due to his academic troubles.  Now back to playing, look for Tuggle to take some time to get back to his old self, but, once he does, watch out.  Tuggle is a freak athlete with a knack for slashing and finishing, and also scoring in the open floor.  He plays well above the rim and should provide Phoenix College this season with excellent energy on both ends of the floor.  A good scorer.  OK shooter.  Active rebounder.  Good defender.