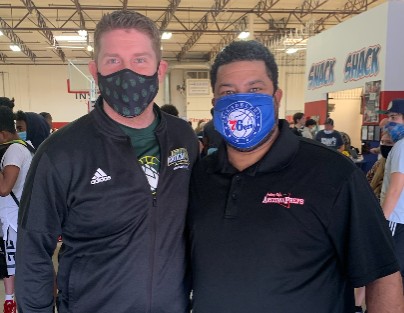 While it looks as if high school varsity level basketball in the state of Arizona will get back to playing, sooner than later, the 2020-2021 junior college season by the Arizona Community College Athletic Conference (ACCAC) is still hanging in the balance. While still under review by the county officials, it is still unclear as to whether the season will begin late, or whether there will be a season at all.

For the first time, in a long time, there was no ACCAC JUCO Jamboree this season - my favorite annual junior college event annually. Consistently, the Jamboree hosts each of the teams in the conference in intense action, with numerous college coaches in attendance to catch a glimpse of the prospects that they will recruit during the junior college season. This event annually helps college coaches from all levels develop an understanding of what Arizona JUCO programs are bringing in for the season. As a result, top performances in the Jamboree lead to improved or even new college recruitment. But not this year. Instead, each of the school's top prospects will have to hope for other ways to gain exposure to 4-year college programs, while it is decided if they will have an opportunity to compete at all this year.

As a former ACCAC juco product myself (Pima Junior College-1992), competing in the ACCAC JUCO Jamboree was the most intense and exciting experience of my college basketball career. Fellow juco players gain superb excitement from competing in the one day of scrimmaged games - looking to maximize their performance, while also seeing what and who opposing teams in the conference have on their squad. It is a very enjoyable experience that this year's of ACCAC prospects will not get to experience. Instead, they will take the floor at some point, and jump right into the season.

But we still do not know if there will even be a season.

I have spoken with many of the head coaches in the conference over the past (6) months, and each of them is very unclear as to what will happen this season, whether it will be postponed or completely cancelled. The conference has not given a clear update yet, and next week a decision will look to be made regarding the future prospects of the 2020-2021 season.

We will keep you posted as to when a final decision is made on the Arizona Junior College season, and I hope that they can play, as there are a lot of young men looking to maximize their academic and athletic opportunities. Junior College prospects also help four-year colleges win at a high level, and provide immediate help to their lineups. The addition of top performing juco prospects is almost mandatory to help college coaches keep their jobs by winning. They also make for some excellent basketball action, while showcasing some serious basketball talent.

We need a junior college season, but if not, I understand.