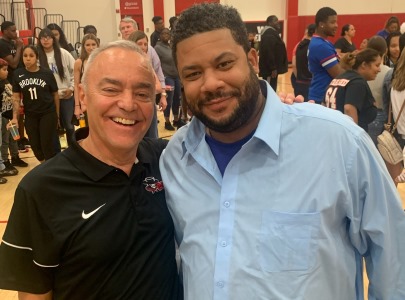 The last time we saw any action taking place in the Arizona Community College Athletic Conference (ACCAC) was last spring, as Glendale Community College and Head Coach Ken Carrillo (pictured) would knock off Pima Junior College in Glendale to win the Division-II Region Championship. While it was expected that Glendale would then advance to the National Division-II Tournament in Danville, Illinois, it would never happen, as the 2020 NJCAA Division-II Men's Basketball Championship would be cancelled, due to the COVID-19 pandemic. Teams that qualified were awarded a national tournament appearance in the NJCAA Record Books.  Glendale would never get the opportunity to compete for a national championship.

Now, almost a year later, Glendale JC will still not be playing, as the ACCAC has decided to cancel the 2020-2021 junior college season for all Maricopa County Junior Colleges, and will pick things back up in 2021. Instead, junior colleges in the conference outside of Maricopa County will be still be permitted to compete this year (2021), and against one another for an opportunity to still earn an opportunity to advance to the national tournaments for Division-I and Division-II.

Cochise College, Arizona Western, Eastern Arizona, Central Arizona and Pima Junior College will each begin their 2021 seasons at the end of this month (January). The (5) JUCO programs will each face other numerous times, before finishing up the season. The (4) Division-I junior college programs, Cochise, AZ Western, Central Arizona and Eastern Arizona will fight it out this junior college season for an opportunity to represent the Region in Hutchinson, Kansas, while Pima will be the lone Division-II junior college. Regardless of Pima's record this season, they will have an opportunity for a Play-In Game at the end of the season to earn the opportunity to represent the Region in the Division-II National Tournament.

It is atleast exciting that these (5) ACCAC programs will get the opportunity to compete, allowing for a season for their respective student-athletes, while other programs in the conference (Maricopa County programs) instead lost many of their players to transfer - for an opportunity for their student-athletes to play this season.

"I called many different programs for some of my kids," said Chandler-Gilbert Junior College Head Coach Steve Silsby. "I wanted to find them a place to play."

Scottsdale Junior College Head Coach Mark Bunker is coming off his best season to date for SCC, but he also had to help many of his kids find college homes as well for this season, as did many other programs in the conference.

It is so unfortunate for these ACCAC programs, as many of them have worked very hard to build their programs for an opportunity to have a strong season in 2020-2021, but now it will become a major time for rebuilding, as many programs lost players, and have student-athletes looking to graduate with no place to go or play.

No ACCAC Jamboree this season - my favorite event of the year, and has been since 1995, when I first began covering the Arizona juco ranks. And no Wednesday evening and Saturday afternoon games to see around the Phoenix and surrounding areas this season. Instead, many of us will have to read the headlines and watch the games over the internet, if we want the ACCAC experience this junior college season.

Looking forward to the 2021-2022 ACCAC season now, when all of the programs will return to the basketball court.