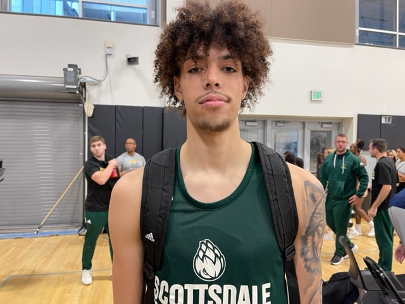 The exciting annual ACCAC JUCO Jamboree took place this weekend on the campus of Chandler-Gilbert Junior College, as each of the teams from the Arizona Community College Athletic Conference (ACCAC) were in action for this annual event, in an attempt to showcase their teams before the season, and also give their teams a tune up before they start the exhibition season.

I have attended the ACCAC JUCO Jamboree since I was in high school in the late 1980's, and also played in it myself while playing for Pima Junior College in 1992. This event means a lot to me, more than most, and I am always excited to be a part of it, as it is ultra exciting for me, as it helps me to get better acquainted with each program for the up-and-coming junior college basketball season. While the JUCO Jamboree is never a true indicator of how good each program is or will be, since there are always so many changes that take place throughout the season, it provides an opportunity to see the majority of the players that will have an impact on their respective programs during the season.

The Jamboree takes place early in the season for each of the participating programs, so many teams have barely practiced together and don't have much in designed plays. Either way, each team of players competes hard and with a high level of intensity, as each student-athlete is looking to show their respective coaching staffs they deserve an opportunity to play major minutes during the season. There are also always numerous college coaches, from all levels, in attendance for the event, so each top-rated prospect is looking to build on their recruiting stock with coaches observing from the stands. A strong performance in this event could lead to much higher college recruitment or any recruitment at all for many of the prospects in action.

Junior college prospects were once a must for most Division-I and Division-II programs, and the addition of top-rated juco prospects once saved coaches jobs. Today, with the recent development and increase of the NCAA Transfer Portal, juco prospects have loss the level of importance they once had, but they are still a commodity as a result of the increased pressure to win by college Athletic Directors and boosters around the country. Older, more mature and experienced players give 4-year college programs a better chance to win, and sooner. As a result, college transfers and juco transfers have a greater importance to college coaches than high school seniors, unless the senior is a top-rated national prospect. This fact will soon make the juco ranks a proving ground for high school seniors, once again, and we will soon see junior colleges around the country get much stronger again, like years past.

The ACCAC once was one of the elite junior college conferences in America. Especially in the 1980's and early 1990's when Mesa Junior College was ranked as one of the Top 10 programs in America, and numerous other programs in the conference were also strong. Those days are over and the league has worked hard to regain that form for many years. After years of being down in talent, the league continues to improve now and this year's JUCO Jamboree proved that fact. While the league is primarily filled with Division-II talent currently, this season there are numerous Division-I prospects in the league for numerous teams, and the addition of Yavapai Community College back to their basketball ways, will only strengthen the league a great deal, as there is now another Division-I juco in the conference and one with a nice amount of talent to boot.

Arizona Western and Cochise Junior College have dominated the league for many years, and have been the class of the Division-I juco programs in the conference. Both teams finished last season competing for the Conference Championship, with Arizona Western winning the regular season title, and Cochise edging out AWC on the road to win the Conference Championship. Both programs faced off in this year's Jamboree in exciting fashion, which has not happened in recent memory. Arizona Western would win the game by double-digits on Saturday. While both programs will compete for the league title again this season, the league has definitely improved and they will surely have more opposition this time around.

Eastern Arizona Junior College will definitely be in the hunt this junior college season, if Saturday's performance was any indication of this season. New Head Coach Cameron Turner was very successful as a women's coach, and now he has transitioned to being the leader for the Gila Monsters. Turner has already done an excellent job in attracting some top talent to the program, as this year's team looks convincingly more talented than recent year's past. Eastern looked very strong on Saturday and ran through their competition in the event. Eastern Arizona is big, athletic and defends at a high level. This team will definitely be one of my favorites to compete with Cochise and Arizona Western this season, among Division-I junior colleges in the ACCAC, and compete hard for the conference title.

Yavapai Junior College, led by first-year Head Coach Jay Joyner, was impressive on Saturday, as the program is very talented as well, especially for a program that has not had basketball for (11) years. Joyner has put together a nice collection of prospects, and he did so by himself, as he did not have an assistant coach until late September. This team should only improve throughout the season, as they develop chemistry and improve defensively. This team is definitely one to watch this season, and it should be very exciting in Northern Arizona this season as basketball returns to Prescott.

The conference is much better this season as a whole, primarily as a result of the development of the Division-II programs in the conference. While some of the programs are a little down, some others are definitely up. Scottsdale Junior College, the ACCAC defending D-II Champions, are back and much better than last season. Scottsdale turned in the best overall performance on the day this weekend, as Head Coach Mark Bunker and his staff commented to me that they have much more talent this season - and they definitely do, led by the addition of 6-foot-7 sophomore Isaiah Broady (pictured), who will be among the top recruited prospects in the conference. The team plays fast, has very good versatility, defends at a high level as a team and shoots the basketball from, as a result of the players they have that can stretch the defense. This teams will be tough to beat this season by D-I's and D-II programs, and has a strong chance to win it all again. If they win the conference this season, they could be in the mix to win it all late in the year, as their guard play is tremendous.

Head Coach Brian Peabody and Pima Junior College will be a force again this season, behind the strong overall play of 6-foot-8 sophomore forward Traivar Jackson. Jackson is a superb talent and producer, and he had the best individual performance on the day, as he dominated around the paint area, and showed serious athleticism and a superb skillset in the event. Jackson is good enough to keep this team in every game, and the program will compete hard and defend, so they should give Scottsdale all they handle for the D-II title this season.

Phoenix College is much deeper this season and again will be led by do-it-all sophomore guard Mike Rogers. Rogers is a true leader and competitor, and is tough as they get. When your point guard and leader is that tough and vocal, you always have a chance. Head Coach Duane Eason is even tougher, and he will have his troops ready to go each night. Phoenix College will also compete hard for a conference title this season, and is one of my sleepers in the conference this season.

Overall, I believe the ACCAC is on the rise again, and will only get stronger over time. While we are not as strong as Texas jucos or numerous other conferences, we definitely have our own culture and have a lot of talent for college programs to take a very hard look at. I am honored to continue to cover this league hard and raise the opportunities for all of the top prospects in our conference. Our players deserve it and are worthy of recruitment. Good luck to all of the teams and coaching staffs this season in the ACCAC.

While I did not mention every program in the conference in this write up, stay tuned for my top overall individual performers from the weekend, and what players to watch this junior college season in the ACCAC.