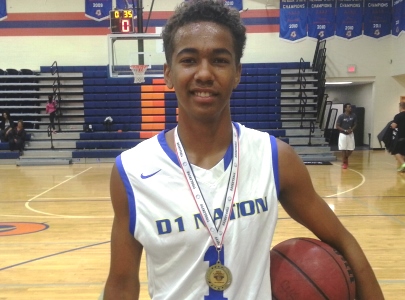 I was in attendance on Wednesday evening for this week's action in the exciting Arizona Club Basketball League (ACBL), and the game of the evening featured the state's top two 16 & Under teams from this spring, the Arizona D1 Nation 16U team and the Arizona Magic Elite 16U.

The two teams would meet up this week for the first time in the ACBL in exciting fashion, with both teams looking to prove to be the better team.  In front of a good crowd, the two teams battled with one another, as the D1 Nation team would lead for much of the game and pull out a 69-57 win.  D1 Nation head coach Glenn Mayberry would get a very balanced attack from his team on the evening, led by the play of talented 6-foot-3 sophomore guard Terrell Brown (pictured), who controlled the game for his team.  Brown scored the basketball from almost everywhere on the floor and also showed excellent versatility in the game - handling the basketball amidst traffic and creating for his teammates.

Red Mountain 5-foot-10 sophomore guard Andres Mayberry played very strong in the backcourt for D1 Nation, and did not turn the ball over against the strong defensive pressure of the Magic team.  The Magic team has had tremendous success this spring applying defensive pressure on opposing guards, but the team was unable to affect Mayberry, Brown and the other D1 Nation guards.

Skilled and athletic 6-foot-6 sophomore forward Gabe McGlothan is quickly rising up the ladder in regards to rankings for the 2017 class.  McGlothan would not dominate this contest, as he has throughout the spring, but he showed just how versatile he is and also proved that he is physically stronger and more athletic than most prospects in the class.

D1 Nation also got strong play from Brophy Prep 6-foot-9 sophomore post Sean Dunn.  Dunn shot the basketball very well with a soft touch from the perimeter.  He also is such a big inside presence, he made it difficult for the Magic post players to be effective inside the paint.  Desert Vista HS 6-foot-4 sophomore atheltic wing Rajhan Billingsley played strong as well - rebounding hard and finishing strong in traffic.  Billingsley plays much bigger than his size suggests and he is a nice talent in the class as well.

The Magic were also led by the play of their backcourt in the contest, as Apollo HS 5-foot-11 sophomore guard Dre Marin shot the lights out in the game - making shots from almost everywhere on the floor and shooting a high percentage in the game, which he always seems to do.  Marin pushed the ball hard up the floor and finished strong in traffic.  He also played strong on the defensive end.  Marin is a definite rising prospect in the class as well, and his play proved it on Wednesday evening.

The Magic also were led by the offensive output of Copper Canyon HS 6-foot sophomore guard Treyvon McCray.  McCray scored from the perimeter and also got to the basket effectively and finished strong around defenders.  McCray is a crafty and unorthodox guard prospect, but he applys pressure on defenses with his superb ball handling and body control in the lane.  McCray and Marin kept the Magic in the game for much of the action.

Tri-City Christian HS 6-foot-8 sophomore post Nigel Shadd played strong in the game, but did not have his usual success in the paint, as he was contested by similar talent.  Shadd however was still very effective and proved why he is regarded as a high-major division-I prospect for the future.  Shadd finished strong inside the paint and ran the floor hard, but he was unable to overpower such defenders as Dunn inside.

Mesa Mountain View HS 6-foot-8 sophomore forward Curtis Hodges showed glimpses of the promise that has college coaches looking to extend scholarship offers to him, but he had problems in this contest with the quicker, smaller wings, as he found himself on the perimeter for much of the game - defensively and offensively.

Mountain Ridge 6-foot-5 sophomore wing Saikou Gueye is a very nice long, rangy wing prospect that has loads of potential for the future.  Gueye has a nice overall skill level and his ability to finish in the lane while slashing, and also play in the open floor with his left-handed prowess, are glaring attributes for him.  Gueye is another prospect in the class that will look to also make a rise in our next class player rankings.

Desert Vista HS 6-foot-9 freshman post Steele Bennett also showed a very soft touch from the outside, which is a very nice attribute for his size.  Bennett is still very young and needs to add more physical strength to compete against other stronger prospects.

Recruiting Notes:  Barrow HS (AK) 6-foot-8 freshman post Kamaka Hepa was the most intriguing prospect on the night.  Hepa played with the Arizona Power Red 16U squad on the evening.  He currently lives in Alaska and was the Gatorade Player of the Year in the state this past season as a mere freshman.  A superb talent with loads of high-major potential for the future, Hepa is currently considering moving to the state of Arizona.  If so, Hepa would immediately become the #2 prospect in the class behind Marvin Bagley in the state.

Hepa is a sure-fire post talent with excellent length and mobility.  He has good hands and feet, combined with lateral quickness for his size.  He is able to defend on the perimeter, which was very impressive, and his length and timing allow him to be a rim protector inside the paint.  A good low-post defender.  Hepa also is very skilled offensively, and is able to make shots out to three-point distance and also has a soft touch from mid-range.  He has been very well coached, as seen by his low-post footwork and ability to score around the basket.  A big-time talent that, if he moves here, will significantly impact Arizona basketball.

Hepa currently possesses offers from San Francisco, GCU and Portland, with many more offers in on the way.

Sunrise Mountain athletic and talented 6-foot-5 junior wing Elijah Thomas is heating up from a recruiting standpoint.  Thomas has played very well this spring, and as a result, he has recently received scholarship offers from Grand Canyon and Cal State Fullerton.  Thomas is a big-time athletic talent with a nice feel for the game and great versatility.  He is among the hottest prospects in the class and should continue to garner much more recruiting attention this summer.