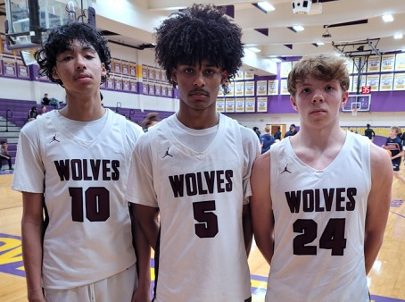 The program decided to go in a different direction after last season, and now Mitch Armour takes over the helm this season, alongside a nice team of assistant coaches that includes former Arizona basketball star guard Michael Bibby. Armour and his staff will be a featured program all season, as everyone looks to see the "House Twins" perform, as they have become household names nationally already, as a result of the tremendous attention they have both received through social media outlets. 6-foot-2 freshman guard Kalek House (pictured middle) and 6-foot-3 freshman guard Kaden House (pictured left) are two dynamic performers that have no fear, and play with loads of confidence and vigor. These two very young prospects seem to get better each time I see them play, as they were very well prepared to enter the AIA high school ranks, and have not missed a beat from their play in the middle school ranks. The amazing addition of the House Twins to the Desert Mountain basketball program has been tremendous, and brings new life to a Desert Mountain program that is looking to build, but is now definitely on the rise.

Kalek and Kaden will immediately become two of the team's leading scorers this high school season, as both young prospects are already considered among the nation's top prospects in America's 2026 Class of prospects. These two top performers are enjoyable to watch, as they compete very hard and play to win. They will make Desert Mountain one of the state's most followed programs this high school season.

The House Twins will have some very good help on this year's team as well, as 6-foot-3 senior guard Zach Anderson returns as the team's leading scorer from a year ago. Anderson is one of my favorite pure shooters of the basketball in the state, as he has a very quick release on his shot and unlimited range. He is able to get his shot off quite nicely, and also can create his own shot off the dribble. Anderson is one of the most underrated prospects in the state, and will have a strong senior season for Coach Armour and his staff. He is an excellent compliment to the House Twins, who both like to create off the dribble and kick to the open teammate on the floor. If left open, Anderson will make you pay. Anderson is among the better sleeper guard prospects in Arizona's 2023 Class.