A Letter From The Editor – Anthony Ray 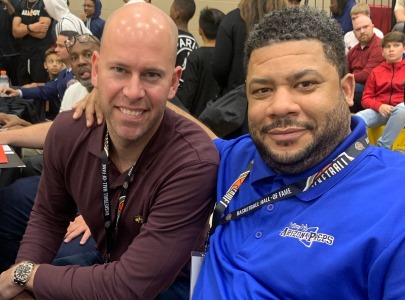 I wanted to take this opportunity to thank everyone in the basketball community that supports Arizona Preps, and also send out prayers to all the families in Arizona and in our nation during this difficult time. As we move forward in our nation's history and look to rebuild, I recently took some very much needed time to recover from surgery and now am ready to return to action - covering Arizona high school and junior college basketball to the highest level, as we have done at Arizona Preps for the past 20+ years.

After taking time out for my health recently and having surgery, and also as a result of the recent scare from the Corona Virus (COVID-19) in America, I felt that it made sense for me to take the necessary time to recover and also to spend meaningful time with my family, as I pray that everyone of you are doing the same. This time period of time in our nation's history is vital for family interaction and support - to spend time with our loved ones and to hit the reset button.

Over the years, I truly have given my life to Arizona basketball since 1995, and have lost alot for it. Divorce, loads of debt, lost jobs, you name it - it has happened to me over the years as a result of my commitment to Arizona basketball. While I operated a highly successful club program for 17 years, the Arizona Magic, the majority of my time has always been spent promoting Arizona's top talent and also most worthy prospects in the state - regardless of who they played for.

Today, the state of Arizona is absolutely loaded with top-rated basketball talent; much, much different than it was before, when I first began. While the state was very talented overall, the perception of Arizona's top talent nationally was that our players were not battle tested and were soft. I spent many of my years promoting and pushing Arizona's top players to coaches that did not care. I felt like the only person in the state that cared about our state's top talent, regardless of who the kid was.

Over the many years, the Arizona Preps site graduated for me personally - from a website that simply was the voice of Arizona basketball at one time, and was vital in the promotion and recruitment of many of Arizona's best student-athletes. The website became a source of sollace for me personally and became an escape for me, from the world and whatever obstacles I was facing in life. In many ways though, Arizona Preps has also became a boulder in my life, keeping me from ever having a normal life. While most normal people in our society take vacations and get away throughout the year to recharge the batteries, I have only had (2) tue vacations in more than (20) years, as I have tried to update my website daily and not ever really miss a beat with my coverage.

Recently, while covering a junior college basketball game, my good friend and long-time Arizona Preps supporter Adam Goldberg told me after the game, "thanks for all you do in covering Arizona basketball." It really touched my heart to hear that from him, because that's all I ever wanted to do it for, was to help others and promote Arizona basketball to a new level of success.

Today, the state has grown a great deal and improved immensely, as we have shoe contracts now from (3) different shoes companies in the state represented - Nike, Adidas and Under Armour. We have some of the best prep schools in the country. We have some of the best basketball talent in America. Arizona prospects are playing very well around the country at their respective college programs. We have many more nice gymnasiums around the state where kids can play, and more kids than ever are playing the sport. Arizona basketball is at the highest level we have ever seen it.

Here is the focus as the Arizona basketball community continues to move forward - learn to work together and support the successes of others. Today, as my good friend and NBA Development Trainer Phil Beckner commented at his recent coaching clinic, there is too much fighting and bickering in our state today. There are too many different people fighting one another and refusing to work together, especially when it is to the benefit of Arizona basketball to do so. The more we can support each other going forward and help each other to be successful, then the better it will be for the participants involved. No one wins when we tear others down, but when we work together to help each other be successful, everyone wins.

As I return now to give my all again at promoting Arizona's best basketball talent and also identifying the top coaches in the state, while providing valuable opportunities for players, parents and coaches, I do so with one idea in mind - improving Arizona basketball. Please continue to help me in this pursuit, as myself and our amazing staff look to continue to develop and add value to the Arizona basketball community. Let's continue to educate the parents and players in the community, while helping each other be sucessful in our overall attempts to build basketball in the state.

Thank you to each of you over the years that have supported Arizona Preps in our pursuit to improve the basketball culture in the state, and I hope that today finds you and yor family in good health and spirits. We will rebuild together and I pray that we improve as a nation and as a state, as we look to move forward over time.