A Big Offer For Bryce Cheney 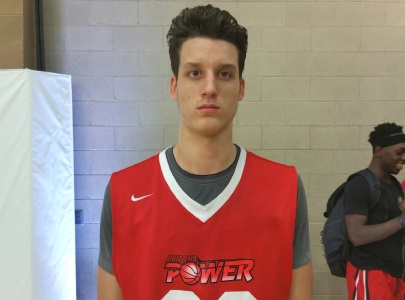 One of the top overall sleeper prospects in Arizona's 2016 class is Moon Valley High School's athletically gifted 6-foot-6 senior forward Bryce Cheney.  After soaring well below the recruiting radar through much of the spring and summer, Cheney put it all together in Las Vegas last week - saving his best performance for the last NCAA evaluation period.  As a result, Cheney has now received a big division-I scholarship offer for himself.

On Wednesday, Cheney received a division-I offer from UTEP, as a result of his strong performance while playing for the Arizona Power Black in the Bigfoot Hoops tournament.  Cheney already possesses an offer from Weber State as well.  It was thought by the Power coaches that Cheney could lose his offer from Weber State during the event, but Cheney instead would earn an even bigger offer for himself.

UTEP is a mid-major plus division-I program, and plays at a high level.  The attraction to Cheney came as a result of his unique size and athleticism, and ability to play big in big games.

Cheney is an explosive athlete with nice overall skillset.  He is capable of throwing down a monster dunk in transition, or while driving hard to the basket at any point in the game.  He also has an ability to make shots from the perimeter with range, but still needs to become more consistent in his perimeter shooting to reach his maximum potential as a player.  Very few prospects have his combination of size and athleticism, making him a special prospect in Arizona's 2016 class.

It is still unclear as to whether or not Cheney will accept the scholarship offer from UTEP, or wait to see what other interest pours in for himself.  He is definitely worthy of some serious recruiting interest.

I will continue to follow his recruitment closely, and bring you any updates as they continue to develop.