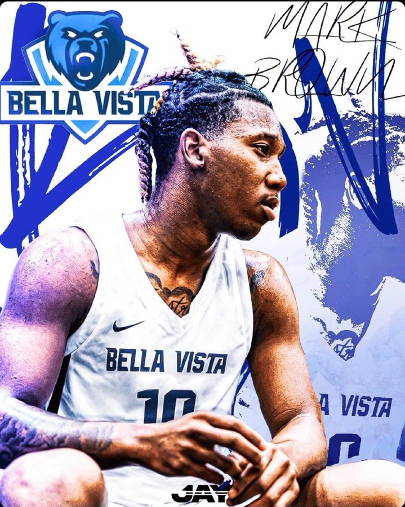 One of the top overall guard prospects in the state's AIA Division is now on the move to the prep school ranks, after it was announced that former Mountain Pointe High School rising senior point guard Mark Brown has chosen to transfer to Bella Vista Prep for his senior season. Brown announces his transfer just days after the recent transfer of his Mountain Pointe teammate, Tru Washington to AZ Compass Prep.

Brown is the younger brother of former Loyola Marymount star guard Brandon Brown. Brandon's former Head Coach Matt Gordon, a national champion at Phoenix College, now is a big part of the Bella Vista Prep program, and Gordon has done a good job of attracting talent from the state to Bella Vista. I have learned that Bella Vista Prep is in the process of bringing in some very talented prospects to the basketball program this fall, and will look to have a very nice team this season. Now we can add Mark Brown to the fold, as he will join Gordon's program as well.

Brown is coming off his best season to date as a junior, as he led his Mountain Pointe program to a 19-3 overall record on the season. Brown averaged 17.8 points, 5 rebounds and 3.1 assists and 1.9 steals per/game. He was set to have a tremendous senior season for Mountain Pointe. Now Brown will look to prepare himself for college basketball through his daily grind in prep school.

Brown is as tough as they come physically, and he is a nice point guard prospect that embodies the position. He is a strong, well-built guard prospect with a strong handle of the basketball and a bull-like mentality when driving to the basket and finishing strong in the lane. Brown is a strong driver of the basketball and finisher, and also has a good mid-range game to go with it. He also has a nice shooting stroke from three-point range, which sets up his strong drives to the basket. Also a strong rebounder for his size, Brown is a lock-down defender on the ball, where he has good lateral quickness and is physical on opposing guards.

Brown is an excellent floor general though and knows how to run a team. The better players he plays with, the more effective he can be. This young man is also coming off an excellent spring and summer performance for himself, while playing for Sal Garcia and Team Zona.

Brown is a very nice point guard prospect that will be able to play immediately for the college program of his choice. I will continue to follow his college recruitment and bring you any recruiting updates as they continue to develop.