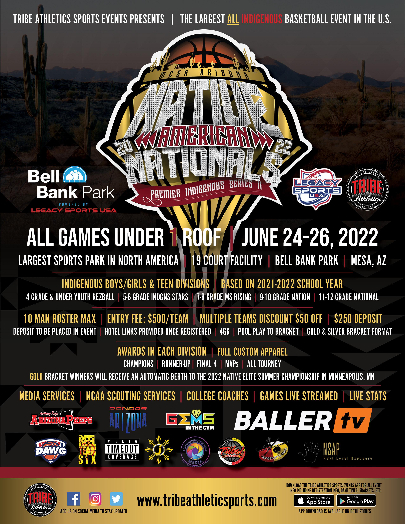 It’s that time of the year, the biggest and best Native American Exposure Series is back for a 3rd year. This year it will take place at Bell Bank BallPark in Mesa, AZ. Bell Bank BallPark is the biggest sports park in North America. Directors Jon Yarrow Jr. & Cameron Smith are continuing to elevate as they continue to bring the TOP Exposure Series for Indigenous Student Athletes in the World.

This year’s event will be well attended by college coaches, regional and national scouts and media outlets. Tribe Athletics continues to change and evolve Native American Tournaments, as they work hard to bring exposure to Native American student-athletes. All of their events are attended by some of the top scouts, media and college coaches. Arizona Preps is very excited to be involved in helping bring needed exposure to the best Indigenous Student Athletes in the World.