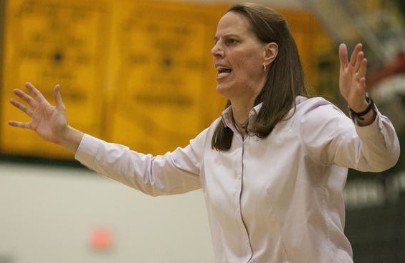 The 6A Final Four features (4) highly talented programs in Dobson, Hamilton, Xavier Prep and Valley Vista. Besides the talent on the court, all four programs have great coaches in Dobson’s Henry Bribiescas, Hamilton’s Trevor Neider, Xavier’s Jennier Gillom, and Valley Vista’s Rachel Matakas. All four coaches are in the running for 6A Coach of the Year, as all had very strong campaigns this season.

Here is the breakdown of the Final Four Match-ups:

This will be a war of the backcourts. Both Dobson and Hamilton sport some of the state’s top talent at the point guard and shooting guard position. Hamilton has Graciela Roybal and Amyah Reaves who combine for 24.4 points, 5.6 rebounds, 5.8 assists and 5.9 steals per/game. Reaves is the type of guard to fill up the state sheet by her effective play on both ends of the floor. Roybal compliments Reaves' play by contributing when she has to cough up the ball.

Dobson has a solid one-two punch of their own in Rachel Early and Jaden Leslie, who combine for 23.7 points, 6.5 rebounds, 4.5 assists and 3.2 steals per/game. Early is an elite guard who brings a cool calm and collected approach to controlling the tempo of the game. Leslie is an elite scorer who knows when to strike the iron when it’s hot.

The only common opponent between both schools is their match-up with Perry. Dobson beat Perry 44-42 and Hamilton split their series winning the first meeting, 75-53, and losing the second meeting, 46-56. Hamilton has the edge, since they are deeper at the forward positions. The key for Dobson to have a chance in sneaking past Hamilton is if they can defend and force them to have a poor shooting night. In Hamilton’s lone loss of the season, Perry held Roybal to 5 points, and the team to an overall field goal percentage of 24%. This should be an excellent game.

This is another excellent game of two elite programs in the 6A division. Coach Gillom and Coach Matakas (pictured) are fantastic coaches who do a great job in motivating their student-athletes, as well as great strategists. Valley Vista won the only regular season match-up, 62-45, to open the season. The Lady Gators of Xavier Prep have since been working to improve, and sparked a (9) game winning streak, leading up to this point.

This is an intriguing match-up, since both teams nearly have four players on each side scoring nearly double-figures. The Lady Monsoon is led by Marisa Davis, Madison Magee, Mikela Cooper, and Alanis Delgado. The Lady Monsoon’s "Fantastic Four" are averaging 52.7 points, 21.6 rebounds, 6.6 assists and 9.5 steals per/game. It is anticipated that this match-up will be up-tempo and high scoring, compared to the other semi-final match-up.

The Lady Gators of Xavier have a "Fabulous Five" of their own in Sarah Miller, Mia Davis, Dominique Nesland, Victoria Saucedo and Sienna Cherwinski. The Fab Five have combined for 51.7 points, 20 rebounds, 10.3 assists and 12.7 steals per/game. Coach Gillom has a young core, as four of the five are freshmen and sophomores.

The Lady Monsoon are the more experienced team and hold the home- court advantage over the Lady Gators. If the Lady Gators are going to have a chance at beating the Lady Monsoon, they would have to hold Davis to 11 points or less, and the rest of the team in single-digit scoring, as Hamilton did in their February 12th match-up. The Lady Monsoon just have to blow the game wide open with their "Fantastic Four" having a huge scoring affair. This game should be very exciting.