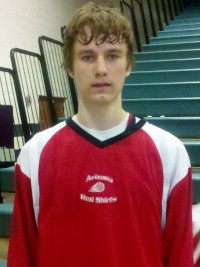 Desert Mountain HS 6-foot-7 senior Austin Cooke is among the state's best unsigned senior prospects
Share
Facebook Twitter LinkedIn WhatsApp Pinterest Email
With many of the state's best prospects in the 2012 class still uncommitted this spring, there will be many top-rated prospects playing through the spring evaluation period hoping to land a nice scholarship offer, or atleast looking to find a college home for next season.
One of the state's best talents still on the recruiting table has developed a great deal over the past two years and has played himself into a good position for himself this spring.
Desert Mountain High School's 6-foot-7, 195-pound senior guard/forward Austin Cooke is one of the state's best talents and also among the purest shooters in Arizona.  Cooke has developed a great deal over the past two seasons, while playing under Desert Mountain HS head coach Todd Fazio.
As a junior, Cooke helped lead the Wolves to a 21-8 record and the state semi-finals for the 5A Division-II Class.  This season, as a senior, Cooke returned to have his best season of his high school career - helping Desert Mountain to many big wins late in the season.  Desert Mountain again finished with a strong 20-10 overall record on the season - this time in the tough Division-I Class.
After knocking off Mesa Mountain View and Brophy Prep in the Section-III playoffs, Desert Mountain would fall to Section-III champion Pinnacle HS in the sectional championship game.  They would then reach the second round of the Division-I state playoffs, before falling to eventual state champion and #1 ranked  Corona Del Sol HS (55-43).
Cooke was a major part of the Wolves' success this season, as he shot the basketball with consistency and played out of position all season long for his team - rebounding hard and defending bigger post players often times.  Whatever was needed of Cooke this season he was willing to do it for his team's success.
Now Cooke has turned his attention towards his own college recruitment this spring.  Still undecided, Cooke has heard from numerous smaller programs this season, and has received several scholarship offers as a result.  He advised me that he would like to play at the division-I level, so he may look towards the prep school route next season, unless he can land the right opportunity for himself this spring.
Cooke also turned heads in the fall at last year's Arizona Preps Fall Showcase, where he was in the running for the tournament's prestigious Most Valuable Player award, after playing at a high level throughout the weekend.  West Coast scout Frank Burlison came away very impressed with Cooke's ability to stretch the defense with regularity.
Cooke also had a very good spring and summer last off-season, while playing for Brian Fabiano and the Arizona Redshirts.  With the Redshirts, Cooke made a name for himself and had one of his best performances in a narrow one-point overtime loss last spring to the Compton Magic (CA).
Cooke will be among the state's most sought after targets this spring, since he has very good size and length and has a serious shooting stroke which he is able to get off quite often and with ease.  He also is left-handed - a nice feature to his game and making him tough to defend.  Cooke will be able to play at either a small forward position or as a shooting guard at the collegiate level.
Cooke is also a good ball handler for his size and is capable of handling the basketball in the open floor.  He sees the floor very well and is a very unselfish player that is capable of making plays for hismelf or others.
Cooke is an adequate rebounder now, and as he continues to get stronger physically he will see his game take off a great deal over time with natural maturity.  He is a solid defender and is capable of defending 3's and 4's.  More focus in this area will allow him to reach his maximum potential as a player.
Cooke is also a very good student and is already a full academic qualifier.
Arizona Preps will continue to follow Cooke's recruitment closely this spring, and bring you any updates as they develop.
Arizona Hoop Review Scouting Report:  Cooke is among the most attractive targets in Arizona's 2012 senior class.  A big 6-foot-7 shooter with excellent range on his shot and a quick, left-handed release - Cooke is a natural shooter with size - a nice attribute.  He is fundamentally sound and is capable of stretching the defense consistently, while also being able to post up and score effectively around the paint with a variety of moves.  He posseses very good footwork and gets into triple-threat position with the basketball in his hands.  He is a good ball handler and passer, making him very versatile as a wing prospect.  He is also a good rebounder that keeps the ball up high and utilizes his body to box out his man.  As he continues to put on size, and his frame suggests that he will be able to quite well, he will see his offensive game really take off.  A very good passer that has an unselfish attitude and is a great teammate.  A solid defender.  More focus in his defensive effort will also make him a much more effective performer.  A very good looking prospect that should develo nicely over time, and has good upside.