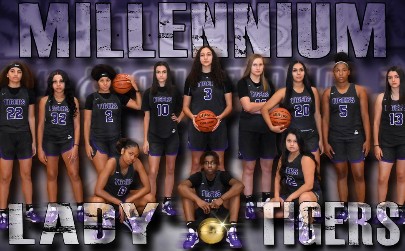 Last week the 5A Girl's Bracket was shook up with #1 Seed Casteel forced to pull out of the playoffs, due to a self-reported prior contact violation. The Lady Colts of Casteel were heavily favored to win the state championship, since they blew out nearly every 5A opponent they faced all season. The result is a wide open race for the State Championship in 5A.

This is an intriguing match-up since upper seeds #1 Casteel and #4 Cactus Shadows are no longer in the field. Gilbert’s first-year Coach Colton Walker, has done a phenomenal job this season. Gilbert usually has a solid tradition. This year’s team is led by underclassmen in freshmen Meisha Caserio, Morgan Evenson and junior Nicole Evenson. The Lady Tiger’s "Big 3" have combined for 36.3 points, 14.8 rebounds, 8.4 assists and 8 steals per/game this season. They are gaining valuable experience to assist Gilbert High for future deep playoff runs. Despite his age, Coach Walker is considered a coaching veteran, as he had coaching stints at the college level. He is a skilled X’s and O’s tactician and excellent motivator.

Flowing Wells had a fantastic regular season with a 12-3 record in the regular season. The Lady Caballeros are led by Milinda Arguellez, Leamsi Acuna, and Navine Mallon. Their "Big 3" have combined for 41.1 points, 22.7 rebounds, 9.4 assists and 10.6 steals per/game. Flowing Wells is a scrappy team, which matches up with Gilbert very well. The edge should go to the home team (Flowing Wells) and having more upperclassmen, however it is hard to say because if the Lady Tigers come out firing on all cylinders they could send home the Lady Caballeros early.

This is the Battle of the Best of the West Valley. Millennium (pictured) and Verrado have historically been two very competitive programs year in year out. They are 5A Desert West Rivals, the Lady Tigers of Millenium won the Region Championship by playing more Region Games to edge out the Lady Vipers of Verrado. The two teams split their meetings during the regular season, with Millenium winning the first meeting 40-33, and Verrado winning the second meeting 31-28.

Millennium was victorious in the first meeting with key contributions from Kassidy Dixon and Elli Guiney. Dixon had 17 points, 7 rebounds, 1 assist and 4 steals, and Guiney had 12 points, 7 rebounds and 3 steals. The only double-digit scorer for Verrado was Amaya Felix with 12 points. The second meeting was quite different where Verrado held Guiney and Dixon to 9 and 6 points total. Verrado’s Kaisha Henry led all scorers in that game with 12 points.

In examining the best x-factor for this match-up, it looks to be the home-court advantage to give Verrado the edge. Both schools play better at home, and in order for Millenium to upset Verrado they would need huge performances from Dixon, Guiney and Mia Amundsen. Millenium needs to slow Millennium's scorers down like they did in the second match-up by grinding out possessions and taking smart shots.

With the #1 seed out, the team that has the most momentum should run away with the 5A Title. Both games are so competitive, I wish the semi-finals were at a centralized site, so I could attend both games. Overall this bracket is very exciting because all four teams have a lot of talented prospects with great coaching.