48-Point First Half Lifts Saguaro In State First Round 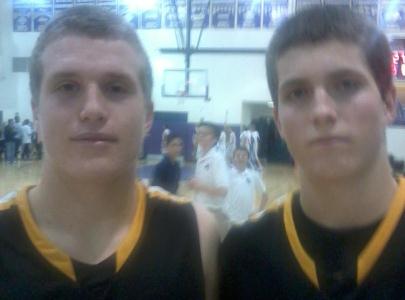 Saguaro was led by brothers, Mike and Matt Hauser, who each finished with 12 points in the victory. Matt, the younger brother, finished with (3) three-pointers and four steals.
Share
Facebook Twitter LinkedIn WhatsApp Pinterest Email

Scottsdale's Saguaro High School entered into Thursday night's first round match-up with #24 seed Flagstaff High School looking to put it all together at the right time of the 2012-2013 high school basketball season.   #9 seed Saguaro (19-10) is one of the state's most electrifying teams on the offensive end of the floor - capable of putting points on the board in a hurry.

Led by the play of ultra-skilled and sharp-shooting 6-foot-1, 185-pound senior combo-guard Ryan Berg and gifted 5-foot-11 senior point guard Mike Hauser, Saguaro has had games this high school season where they have caught serious fire on the offensive end of the things - putting up big scoring numbers on any single night.   Saguaro has the offensive fire-power to blow teams out, as they shoot the basketball extremely well as a team and have the ability to stretch the defense all over the floor.

Thursday night's match-up with Flagstaff High School (18-10) in the first round of this year's Division-II state playoffs looked to be a match-up between two teams with similar records on the season, except that Saguaro has played much better competition throughout the season and, of course, features the play three of the best shooters of the basketball in Arizona in Berg and the Hauser brothers - Mike and 6-foot sophomore guard Matt Hauser.

Saguaro's lead scorer, Ryan Berg, would only finish with 5 points at the half, as he twisted his left ankle on the first play of the game.  Berg would continue to play in the game, but would struggle with his quickness and ability to make strong cuts.

The second half would begin with an offensive rebound and put-back by Kretch and then a three-pointer by Matt Hauser to put Saguaro ahead 55-22 with 5:50 left to play in the third period.

Flagstaff was struggling mightily in this game - everyone except for 6-foot-1 junior guard Trevor Johnson.  Johnson finished with a team-high 12 points in the first half, and would continue playing well for head coach James Kirk in the second half - despite his team struggling around him.  Johnson would convert a contested three-pointer over a defender early in the second half, and then drive around a defender for a finger-roll layup with 4:45 remaining in the third quarter.

Matt Hauser would connect on another three-pointer from the top of the key, after an assist from his brother Mike, and then Ryan Berg would run the floor for a left-handed transition layup over a defender after another assist from Mike Hauser.  Immediately following the play, Berg would go to the bench for the remainder of the game - resting his ankle for the future second round state playoff game.

Saguaro would finish the third period with a huge 66-28 lead, and would then empty their bench for much of the fourth quarter.  Saguaro would cruise to the big playoff victory - 78-49 over Flagstaff.

In the game's fourth period, Flagstaff's Trevor Johnson would bring home two of the most impressive dunks of the high school season, as he would bring home a two-handed dunk on the break, and then convert a two-handed reverse dunk on the break a few plays later.  Johnson is among the most athletic performers in the state and a nice looking prospect for the 2014 class.  He is also the son of former Flagstaff standout, Northern Arizona University star guard and Flagstaff HS girl's head coach Tyrone Johnson.

Saguaro will now move on to face #8 seed, Tucson's Sahuaro HS, in what will be a very interesting match-up of two schools with the same name.   The game will be played on Saturday evening in Tucson.