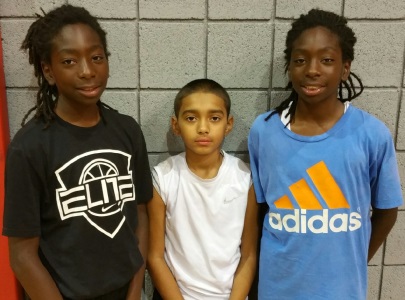 The Arizona Preps Fall Showcase recently took place on the campus of Glendale Community College, and this year's Showcase was as exciting as ever with many top performances from numerous prospects in the event.  This year's event also included some younger prospects that showed very well in the event - prospects that we would like to feature as some of the top young performers to watch for in the future.

Ty Ali, is a small guard prospect for the future that should grow a great deal before entering high school.  If he doesn't grow much then look for him to play the part of a waterbug point man that creates havoc for opposing teams with his defensive prowess and excellent lateral quickness.  Either way, he will be a floor general of sorts with a high motor and an advanced understanding of the game.

Ali has worked almost daily on his craft since he was younger with a very focused father.  He also spends a lot of time each week working closely with former professional player, Alex Scales, a former star player from the University of Oregon.

The "twins," as they are known - Tentraeveon Cowan and Teantrae Cowan, are both similar players, with both possessing excellent quickness and superior handles of the basketball.  Both players see and survey the floor, looking to makes plays for themselves and others on the basketball court at a high rate.  Both are capable of getting into the lane and finishing, while also possessing an ability to knock down the open shot.  The Cowan brothers are also excellent defenders and make it very difficult for opposing guards to operate.

Both young men have each developed at an early age and share the backcourt with Ty Ali throughout different club teams and league experiences.  Each of these three different prospects performed very well in this year's Fall Showcase event - proving that they were each capable of playing against much older competition.

I will also be keeping a close eye on these three young prospects for the future, as each of these young men impressed me in this year's event.