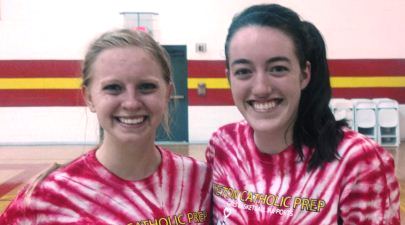 The only girl's basketball program in the state of Arizona that has been able to be mentioned in the same breathe as the lady Knights of St. Mary's High School, is the girl's basketball program at Seton Catholic HS.  The Sentinels are winners of the last three consecutive state championships in their division - (1) Division-II state title last season and (2) 4A Division-II state championships before that.

Under terrific head coach Karen Self, Seton Catholic has won an amazing 3 consecutive state championships and has compiled a record of 110-19 over the last four seasons.  Seton Catholic (9-2) entered Tuesday night's match-up with previously undefeated Notre Dame Prep (5-1), looking to build some more momentum after winning their last four games on the season.

While hosting Notre Dame Prep on their home floor, Seton would jump out to a quick lead in the first half.  After a three-pointer from the corner by ultra-talented 5-foot-8 senior guard Anne Marie Holter, Seton would take a big 24-7 lead with 6 minutes left to play in the first half.  With Notre Dame Prep looking lethargic on offense, another driving layup from Holter with 4:20 left to play in the half would give Seton a 26-11 lead.

But Notre Dame would fight back late in the second period to make the game competitive.  After a 6-2 run by Notre Dame would narrow the gap, 5-foot-10 junior forward Molly Hughes would complete a three-point play after being fouled on a drive to the basket - making the score 28-22, Seton.

An offensive rebound and a put-back by Seton's 5-foot-10 junior post Julia Barcello with :55 seconds left to play in the half would give Seton a 30-22 advantage.  Seton would take a 30-23 lead into halftime.

After a fired up halftime talk from Seton head coach Karen Self, Seton would advance their lead to double-figures, 35-25, after a left-handed driving layup in traffic from Holter.

Consecutive layups by 5-foot-7 senior guard Susan Spinner just before the end of the period would give Seton a nice 43-29 lead heading into the fourth quarter.

In the fourth period Notre Dame would keep close, but would be unable to make a serious run at winning the game.  After two free throws by Holter late, Seton would hold on to win the game 56-45.

Notre Dame would be led by the play of their talented duo of Molly Hughes with a team-high 14 points, and Monica Turley with 11 points in the loss.

"We can get better defensively," said Seton head coach Karen Self after the game.

Seton Catholic will move on to host Cactus Shadows HS on Wednesday night.