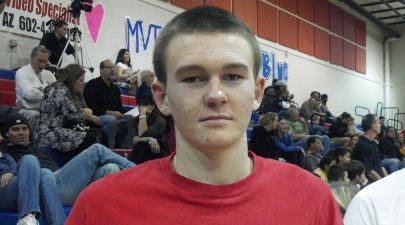 While there were many top performers this weekend in both events, three prospects from the state of Arizona stood out from the rest as college coaches, scouts and media took major notice.

- Dastrup is the top low-post prospect in Arizona's superbly talented 2014 class, and that is saying a lot in a class that is loaded with high-major talent at the post position.  Dastrup is a physically well-put-together post prospect that already possesses the body of a high-major division-I post prospect.  Possessing broad shoulders and being built like a tank, Dastrup is an absolute load physically.  A strong low-post scorer with good athleticism for his size, Dastrup is an excellent finisher already around the basket and enjoys physical contact.  Very well-coached in the Mountain View system, Dastrup is much like that of former Mountain View graduate and Cal post player Harper Kamp, except he is bigger, will be even stronger and more athletic.  You got it, an elite-high major division-I prospect.  Will be another Nick Collison (NBA) before it is all said and done.  Already has an offer from Utah State.

- Hopkins is by far the top-rated prospect in Arizona's 2013 class and already has 8 diffferent division-I offers - with many more to come in the very near future.  A superbly talented and athletic prospect, Hopkins likes to play from the point position on the floor, although he still needs to improve his ability to run a team and make players around him better.  Hasa very nice handle of the basketball though, so he definitely has the pieces to become a better point guard in the future.  A big-time athlete, Hopkins is capable of creating his own shot at any time on the floor and is a very good slasher and open court player.  A good mid-range shooter, but still needs to become much more consistent from long range and improve his shot selection.  A very good defender that, if he focuses, can become a lock-down defender at the next level.  Big-time talent that, once he learns the game, could play as long as he wants to in the future.

- Pickens is a fundamentally sound performer that makes plays and is a superb shooter of the basketball.  Shoots a very high percentage and has an excellent feel for the game.  His nice shooting stroke makes him a threat to score the basketball from anywhere on the floor, which allows him to set himself up for a nice mid-range game as well.  Makes players around him better as a result of his high basketball IQ and ability to find the open man on the floor.  Not overly athletic, but he is athletic enough to make himself a very attractive prospect to high-major division-I programs.  Already has an offer from Arizona State on the table.  Will see many more offers in the near future.  A big-time talent in an already loaded 2014 class.