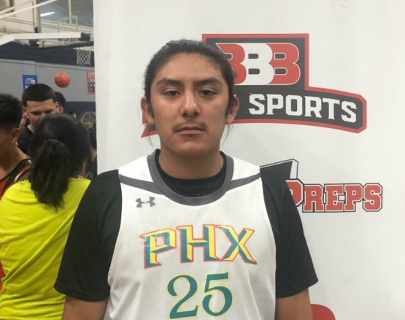 In what as event for the ages, the 2nd Annual Native American Jr. Nationals took place in Las Vegas, Nevada, recently. Each team, consisted of players of native descent, and competed on a high level to become the national champions. Below are some of the standouts from the event (In no particular order).

A long and athletic forward who can score from all three levels. He excels on the offensive glass where his quick second-jump allows him to snatch boards and score in the paint. Defensively, he can guard multiple positions and protects the rim.

A shifty guard prospect with great strength and ball skills. Plays with pace and uses his size to bully defenders. He has a great feel for when to score and when to distribute to his teammates for open shots.

A pure shooter who you simply cannot leave open. He can catch and fire quickly, which forces hard close outs, where he proved he can create off the dribble for his teammates.

A long wing prospect who excels at getting open and knocking down shots. Showed good athleticism when attacking the rim.

A true floor general who plays with toughness on both ends. Extremely quick when attacking the rim and can finish over much bigger defenders with his creativity. Defensively, he is a pest with quick hands who can pick up 94-feet.

An athletic wing who has a great motor. He thrives in transition where he finishes in traffic easily. He possesses a great first step to get around defenders and can guard multiple positions.

Extremely quick guard with an explosive first step. Constantly gets paint touches where he excels at making the right decision with the ball, whether it’s a timely floater or creating for his teammates. Defensively, he causes havoc.

A tough guard who plays with great intensity. He has good range on his jump shot and can get hot quickly, hitting seven threes in just one game.

Does a good job of controlling the pace of the game. Plays strong and constantly gets downhill to attack the rim. Showed great strength when finishing in traffic.

A terror on the block. Uses his body well to seal defenders to create easy buckets in the post. Has a knack for being in the right place for offensive rebounds and has great hands.

South Dakota’s 2021 Mr. Basketball is an effortless scorer who is very gifted athletically. He has in the gym range, a great handle, and the uncanny ability to control his body in the air when attacking the rim. A pleasure to watch.

The unsigned senior is a natural slasher that is also capable of stepping out to the perimeter. Makes an immediate impact any, time he is on the court.

Long and athletic big that had a good feel for the game. Uses his length not only on the defensive side to detour the offensive to score an easy basket, but also gives him the advantage to getting to the rim. Committed to Bismarck State.

Leo (pictured) knows how to use his body for positioning around the basket. When he is not looking to post up, he is spotting up for three. High basketball IQ player that can be a reliable option on the court.

Jevon is athletic with an attack the rim mentality. Looks to dunk the ball each chance he gets. Uses his length to cause turnovers and easy baskets for his teammates.

Micah is very versatile and athletic. He thrives in transition where he finishes over defenders with authority. Defensively, he can guard multiple positions and constantly changes shots.

A lengthy guard who excels at driving through the lane and finding the open teammate. Will look to push the ball in transition any chance he gets. Prides himself on being vocal and the leader of the team.

An intriguing under-the-radar prospect with a ton of upside. He is quick, athletic, great motor and finishing ability.

Has elite scoring ability, great motor and plays physical on both ends of the floor.

Andrew immediately stood out with his knockdown shooting ability. He takes pride in his passing skills and getting others involved.

Lethal passer on the fast break. Tough defender. Not afraid to take a charge. Constantly driving to the basket. Lives at the free-throw line.

Smooth operator that plays under control. Makes defenders play at his pace. Always looking to find open shooters but will knock down outside jumpers. Relentless defensive energy. Will pick up full court.

Kayden is a promising big man. He has great length and athleticism and shows good instincts on the defensive end. He has an incredibly high motor and is a great rim runner. Offensively, he can score on the block and is a constant threat to catch lobs and finish with dunk over defenders.