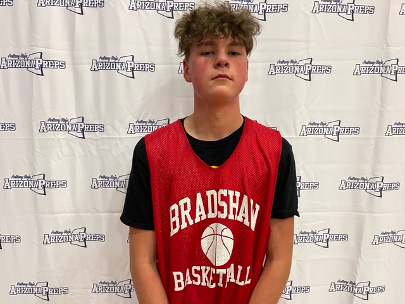 It is still very early for Arizona's 2024 Class of prospects, but one prospect that is making a strong case and on the rise in the class is Bradshaw Mountain High School's 6-foot-4, 175-pound sophomore Mason Hunt. One of the top overall prospects and definitely one of the top underclassman prospects in Northern Arizona, Hunt is a young prospect that is on the rise for the state's 2024 Class. I have seen Hunt develop over the past year, and have been very impressed with his development and potential for the future.

Bradshaw Mountain is off to a 2-2 start on the season, and have won their past two games on the season - including a big home win on Friday night over Northern Arizona rival, Prescott High School (55-45). In the victory, Hunt helped lead his team to victory with several key baskets down the stretch, including a three-pointer late and a nice dunk over a defender on the break to close out the win. Hunt's late game performance proved his competitiveness and extreme potential for the future. He is a sure-fire college talent over time, and is just beginning to realize his potential.

Hunt has good size now and is still growing a great deal, so he should grow a couple more inches and develop into a nice wing prospect over time. He has a good overall skill level and is fundamentally sound as a player. He is a good shooter with range on his shot, and has grown to become very consistent from longer ranges. He is a strong driver of the basketball and finisher currently, and will only continue to get better in this area of his game as he matures physically. He is athletic now and will become much more of an athletic finishers as he matures as well. He will also see his mid-range game develop as well over time, as he gains more physical maturity and confidence as a player.

Hunt has good versatility and is a good handler and can create his own shot. He is also a good passer of the ball. Hunt is a strong rebounder also and will only get better in this area of his game as well. He is a good defender in the post now, and will need to focus defensively on guarding on the perimeter, to become a better one-on-one defender against quicker perimeter players.

Northern Arizona has some very good younger prospects and Mason Hunt is one of the elite underclassman prospects in the area, and has become one of the top prospects in Arizona's 2024 Class. I have grown to really like him as a college prospect over the past year, and look forward to seeing him continue to develop into a Division-I prospect over time.