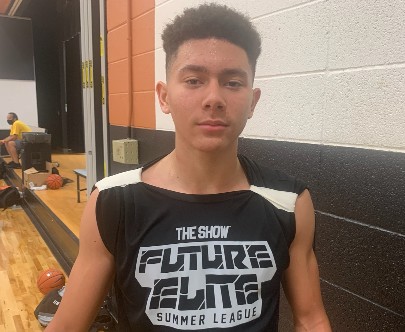 Arizona's 2023 Class is on the rise in the state and one of the top guard prospects in the class is St. Mary's High School's 6-foot sophomore guard Vincent Delano. Now entering his sophomore season as an expected young contributor to the Knight's loaded varsity program this season, Delano is one prospect with excellent potential for the future, that will look to have a immediate success this high school season.

Delano had to wait his turn last season, while being a very highly regarded incoming freshman prospect on a Knight's basketball program that has developed quickly under the strong leadership of Head Coach Damin Lopez. Lopez has built a program now loaded with Division-I prospects, after the program and the school saw their struggles before his hire. As a result, Delano saw his time primarily last season on the junior varsity level. But this season will be much different for the much improve Delano.

Delano is now a year older and has grown a great deal physically in a year's time. He is stronger physically and much more explosive off the floor. His shot is quick and consistent with range for such a young prospect, and he plays fast and can create off the dribble. He is a very good ball handler that is very difficult to keep in front of, and sees the floor very well and enjoys passing the basketball. He pushes the basketball up the floor. He is also a very good defender that plays passing lanes, and is a strong on-the-ball defender.

As a result of each of these assets and attributes as a player, Delano has a very bright future ahead of him as a college prospect. He will round into a Division-I talent for sure over time, and should become one of the higher recruited guard prospects in the class. I really enjoy watching him perform at such as young age, and see his progress and extreme potential for the future.

While he will definitely develop nicely over time, this season he will be counted on to help lead a very talented Knights' team that is absolutely loaded with players at every position. Delano will back up Keiren Brown and Jason Fontenet at the guard positions this season, one of the most talented backcourts in the state. Brown was selected as a First-Team All-State selection last season as a junior, and Fontenet is rated by our staff as the top guard prospect in Arizona's 2023 Class. For Delano, this will be a major key, as he will not have to have so much pressure to perform, since the talent level at his position is immense. Instead, he will have the opportunity to develop, as he will be relied on primarily to provide depth.

The sophomore season will be a big one for Delano, as he looks to help lead the Knights to this year's 4A State Title. But watch out for the future ahead of him, as he should blossom into one of the state's elite guard prospects.