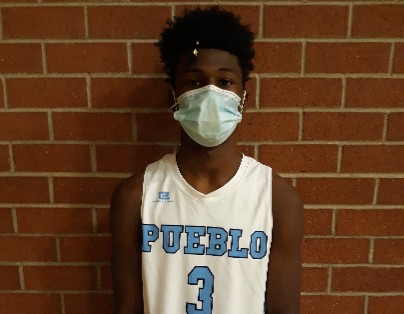 Standing at 5-foot-10, don’t let the size fool you. Wearing #3 makes me believe it’s a tribute to legendary NBA scoring guard Allen Iverson. I can see why he picked that number. He is lightning quick with a knack for creating offensive opportunities for himself or his teammates. What amazed me the most is his composure for being a sophomore.

I was able to talk to his Coach, Harry Whitaker Jr., about the addition of Armari.

“We are very blessed to have Armari in our program," said Whitaker. "He is a great young man who works hard and compliments our team. He has a high basketball IQ and a great motor. He opens up the floor for Marcus (Coleman) and he gets Zach (Morgan) the ball in positions where he can score. He puts pressure on the defense in the pick-and-roll. He has improved on his ability to get others involved, since arriving this summer by way of Fresno, California."

I was able to observe him play against one of the top teams in 4A in Salpointe Catholic on February 8th. Carraway proved to have a high IQ, as he seemed cool, calm and collected in facilitating the offense. He showed an elite ability to slash, score and dish to open teammates. Coach Whitaker Jr. runs a nice pick-and-roll offense where Carraway, Morgan and Coleman look to thrive as a triple-scoring threat. Carraway finished with 16 points, 6 assists, 3 steals, and 1 rebound.

One of his other attributes is his vision and quickness. He showed a knack to pick off bad passes and fill transition lanes to push the tempo. On defense, he shows a great ability to defend off and on the ball. He shows natural leadership, despite only being an underclassmen.

If he continues to work hard and develop, he has a high ceiling. College coaches, please put this young man on your radar.