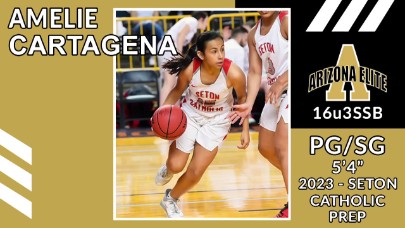 Sophomore guard Amelie Cartagena plays for the 2020 4A State Champs, Seton Catholic High School, and also the Arizona Elite 16U club program.  Playing for a state championship team as a freshman isn't easy, but Amelie did, and had some nice numbers to show for it. She helped lead Seton to an impressive 26-3 overall record last season, and a state title, while also making her AZ Elite 16U team a very tough team to beat also.

Amelie is a tough guard that sees the floor well, which makes it impressive when she's distributing the ball.  She is also an excellent shooter of the basketball and has a very good skill level. We'll see a big jump in Amelie's numbers this year, as Seton looks to retain their title.  For her efforts last season, she was selected as a member of the 4A's Desert Sky All-Region Honorable Mention Team as a mere freshman.

Amelie will undoubtedly play at the next level, as she continues her education, and will be a valuable piece to any team she's a part of.  She shared with me some new portions of her game, and definitely stepping up her threat level this year, is one of them.

I will be keep a close eye on Amelie as she continues to develop and reaches new heights as a player and as a college prospect.