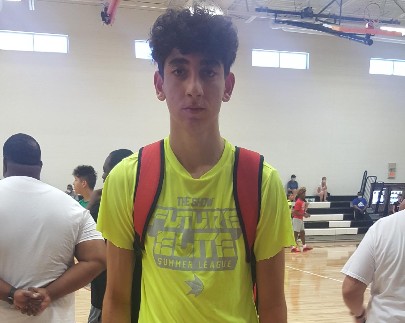 Madi was an instant success last season as a freshman contributor for Brophy Prep. Madi immediately stepped into the Broncos' lineup and showed excellent potential for the future. Whenever his sophomore season picks back up again, look for Madi to improve his numbers a great deal and become one of the better young prospects in the state - regardless of class.

A very athletic wing prospect with an ability to play very well in the open floor and make plays for himself and others, while being a potential human highlight reel for the future, as a result of his extreme bounce and lift off the floor. Madi is just beginning to realize his own potential for the future, and I was very impressed with him throughout the month of June, as he proved that he was well worth his current ranking amongst his peers. Often times, it is difficult to see just how good a prospect is or can be, when they are competing against older prospects, but in this year's Future Elite Summer League, the opportunity to see the best talent from two different classes competing on the same court, proved to be a valuable experience for Madi - proving just how good his size and athleticism are, and how good his potential for the future is.

Brophy Prep is absolutely loaded for the future, as the program has numerous young prospects that will combine to give the Broncos a chance every night. The combination of Madi and rising junior guard Patrick Chew is a definite serious 1-2 punch combination that should fair very well for Brophy Prep fans over the next two seasons.

Currently, Madi does not have any scholarship offers to his credit, since he is only entering his sophomore season, but this is one young man for sure that will garner loads of recruiting attention over time. Over the next season, watch for his college recruitment to take serious shape and reach new levels. Madi is a future high-major prospect with loads of potential and upside for the future.

I will continue to watch him closely over the next few years of high school basketball, as he looks to develop into one of the state's elite overall talents.

Arizona Hoop Review Scouting Report: Madi is a superb talent for the future, as he looks the part. A longer, very athletic and mobile wing prospect that likes to handle the basketball in the open floor and makes plays for himself and others. He is a very good shooter with excellent range on his shot already , and has a quick release on his shot. A strong finisher at the rim, that will improve in this area a great deal over time, as he matures physically and continues to get stronger. Has a good handle of the basketball and is fundamentally sound. Has a good overall fundamental approach to the game. An active rebounder. A good shotblocker. Runs the floor hard and finishes well in transition and in the secondary break. Still growing physically and could grow to become a 6-8 wing, which changes everything for his future recruitment. A prospect with a very bright future ahead of him and an excellent student.