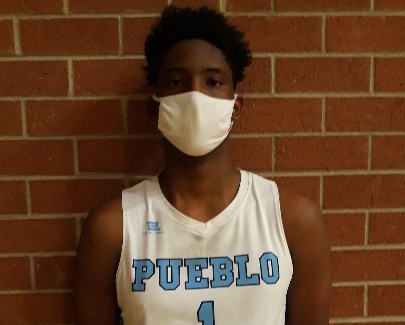 Pueblo High School's 6-foot-11 junior post Zach Morgan is a huge find in Tucson. This young man has a high ceiling, and has been developing quite well. Morgan has been putting up monster numbers thus far, while averaging 11.8 points, 4 assists, 12.3 rebounds and 2.6 blocks per/game. I was able to see him play most of the summer, as well as recently against a solid Salpointe Catholic team.

He has bulked up since the summer and plays with more confidence. He has a nice scoring ability from inside with a smooth jumper to hit the occasional perimeter or mid-range shot. I love his presence inside, as he cleans the glass well and is a good shot-blocker inside. He moves well for his size, and has the vision and IQ to dish the ball to them if defenders collapse on him.

Morgan is a nice prospect where Phoenix College and Pima College have offered him. I think he is a solid JUCO prospect with a ceiling of a High D-2 or Low to Mid D-1.

Coach Harry Whitaker Jr. has a nice 1-2-3 punch in Morgan and guards Armari Carraway and Marcus Coleman. I expect Pueblo to make some noise in the playoffs this season.

I feel like a minor attending high school basketball games in Southern Arizona. I am constantly uncovering a lot of hidden gems that don’t garner as much attention as prospects in the Valley. The staff at Arizona Preps are working hard to uncover those hidden gem prospects, no matter where they are located in the state, and put them on our platform to be seen by college coaches. This is why Arizona Preps is the state’s premier scouting service, as we have staff located all around the state.