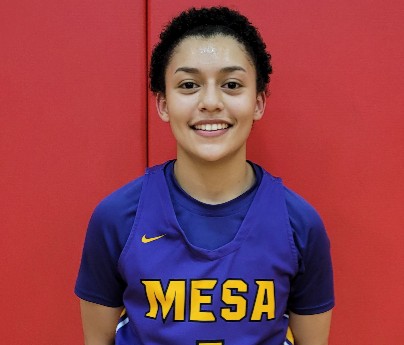 I am sure a lot of our readers who are adults and into investing in the stock market have seen AMC Theaters and Gamestop stocks spike up in recent weeks. Well the same can be said about Mesa High School's junior point guard Mackenzie Shivers. The only difference is, I don’t think Shivers' stock will drop anytime soon, but just continue to rise.

Shivers is a skilled point guard who I had the opportunity to scout in two of her games this season. I could see a lot of potential in her the first time I watched her play against Dobson HS.

Mesa Head Coach Katie Fonseca has been telling me since last season that Shivers is one to watch for. Then fast forward to her game on February 17th against Seton Catholic. She put up 22 points, 5 rebounds, 3 assists and 5 steals in an impressive performance against the #1 team in 4A (who I ranked as the #1 team in the state regardless of classification). Seton Catholic is loaded with college prospects, as high as mid & high major prospects. Besides dropping 22 points, she also scored her 1000th career point.

It was a special week for Mesa High School as senior guard Jimari Grayson also dropped his 1000th career point (on the boys side) earlier in the week.

Shivers is an underrated prospect with tremendous upside. She has lightning-quick hands with a strong spirit. She looks to compete the entire game and shows no quit. She has solid vision, decision making and a high basketball IQ. I like her ability to facilitate the offense by creating scoring opportunities for both herself and teammates.

She also has a nice finishing ability and a mid-range jumper. I really like how she doesn’t hesitate to step up and make big plays on both ends in a clutch situation. She is willing to take the big shot or make the big defensive play. She is a solid on and off-the-ball defender. I love her anticipation on defense; she seems to always be at the right place at the right time.

Shivers has a huge upside and is under-recruited. She has shown her ability to play at a high level by competing with top-notch talent all season.

Shivers has the potential to be a nice D-1 mid-major prospect. College coaches take note of this definite sleeper prospect.