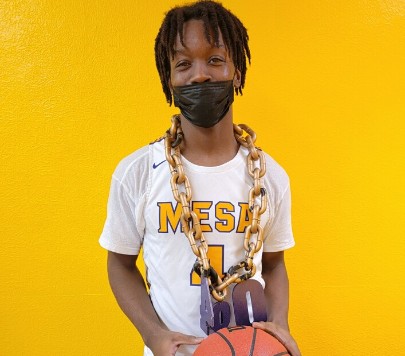 The pandemic has had a bad impact on some high school programs throughout the state. Mesa Boys Head Basketball Coach Scott Stansberry has made no excuses in getting his Jackrabbits hopping hard into the season. After a disappointing 11-16 season last year, the Jackrabbits are on fire this season with a 9-1 record. One of the players leading the charge is slashing 6-foot-1 senior point guard Jimari Grayson.

In last night’s game against Chandler, Grayson put up 20 points, 5 assists, and 4 rebounds. He also broke into the 1000 points club for his career, and held one of the state’s top scorers, Carson Kelly, to 12 points. Currently Grayson is having a fantastic season, he is averaging 12 points, 4.1 assists and 5.8 rebounds per/game.

Grayson is a downhill-type scorer who plays unselfish. He thrives in Coach Stansberry’s system - completing Mesa's cast of the Big 3, alongside Steven Cervantes and Tanner Crawford. He is a very strong and athletic prospect who is under the radar. He has an elite ability to facilitate the offense by putting his teammates in scoring position, as well as wrecking defenders with his aggressive slashing ability. Grayson is a physical prospect who loves contact.

I was able to speak to Coach Stansberry after the game about him.

Q: What attributes are his strengths?

A: His defense, downhill strength and passing are his best attributes on the court. He can keep anyone in front with his lateral quickness and speed, and he also is a tremendous rebounder. When he has the ball, he can get to the rim at will and can also hit the mid-range if you play off him.

Q: How has Jimari impacted your program?

A: Jimari has impacted our program tremendously. It didn't take long for him to fit in, since he is such an unselfish kid. He makes all of his teammates better with his court vision and ability to make plays easier for them. Jimari puts the team first, and that is always a characteristic we look for at Mesa.

Q: What can college coaches expect out of him?

A: Wherever Jimari ends up, that school is getting a player that is constantly working to get better and is extremely coachable. He is always looking to add to his game. He can score or facilitate and will do whatever you need him to. A very humble individual that stays out of trouble. Jimari will immediately make a program better.

Grayson is one of the most underrated prospects in the state. I feel with his athleticism, explosiveness, quickness, finishing ability and work ethic, he can be a low to mid-major D-1 player. Colleges looking for an unselfish, defensive minded, high IQ, high character point guard - look no further, Jimari Grayson is your guy.