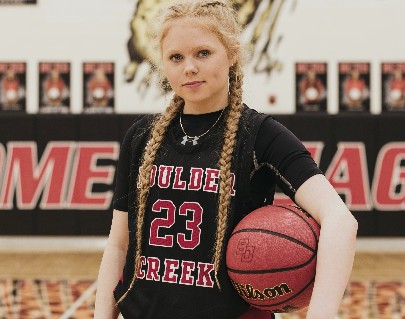 Prior to this year, Boulder Creek 5-foot-6 gifted senior point guard Kayla Clark might have been one of the best prospects in the state, that you never heard of.  Despite being a 4-year starter on a perennial Top 15 team in the largest conference in the state (6A's Desert Valley Section); despite shooting over 73% from three-point range as a freshman (the highest in the league that year and in school history); despite averaging a team-leading 18 points per/game in her last full non-COVID club season (2019) on a national circuit, all the while carrying a 4.8 CUM GPA in advanced courses (first in her class), Clark, 2020’s Female Scholar Athlete of the Year, was still largely unheralded.

An unfortunate injury last year and Clark's understated style may have both added to her flying under the radar. In an age where scoring is king and promotion on social media is encouraged, Clark refuses to post about her accomplishments, or even permit her parents to do so.

Coached for most of her life by her father who was part of a National Championship in his own right, Clark reflects, "Dad always said if you have to tell everybody how good you are, you are probably not very good."

This same personality carries over to her unselfish style of play. She gets just as much satisfaction out of an assist as a bucket.

“I will do whatever it takes to help build the confidence of the players around me, which will ultimately helps the team win more games in the long run than me personally just going out there trying to score a bunch of points,” Clark stated.

Injury wise, Clark played the entire season last year as a junior with a broken thumb on her shooting hand.  The injury occurred the second game of the year, and should have sidelined her for the season.  Instead, Clark insisted the doctor install a special semi-permanent cast that she could remove at game time only - allowing her to tape up and play, and then put the cast back on. In addition Clark played through extremely painful plantar fasciitis the second half of the season.  Injuries aside, she still managed to lead her team in most stat categories and help them into the second round of the state championship - earning Playmaker of The Year, Defensive Player of The Year and Honorable Mention All-Region awards.

Healthy this year, Clarks’ talent is now gaining plenty of attention.  Five games into the 2021 season, the Boulder Creek Jaguars are undefeated, and Clark is leading the entire 6A Desert Valley District in nearly every major statistical category.  She is first in rebounds, averaging 10.6 per game; first in steals, averaging 7.2 per game (leads the state in steals currently); first in assists averaging 6.4 per game; and first in double-doubles with 2.  Clark has actually tallied up (2) triple-doubles as well already this season.

Fortunately, lack of hype did not deter Clark from receiving opportunities to to play college basketball, as she received interest from several Division-I programs, including multiple Ivy League Schools, which left her with solid options.  On signing day though, Clark decided to sign a National Letter of Intent with Southern Utah University.

According to Clark, “The campus is beautiful, and the coaching staff there did a great job of making me feel like part of the team - even through the COVID difficulties. I like their style of play and I’m excited about contributing to their success.”

Now that Clarks’ play is in the spotlight, it looks like Southern Utah may have gotten a steal of their own.