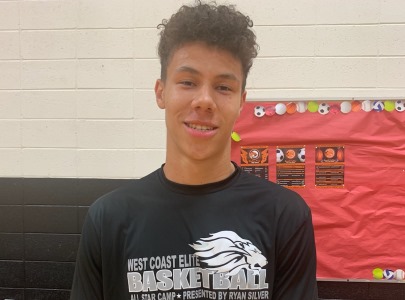 One of my favorite overall young prospects in the state is Sunnyslope High School's talented and promising 6-foot-7 sophomore wing prospect Grady Lewis. I have been impressed with Lewis' development as a player for some time now, and this young is quickly growing into becoming a formidable talent in the state.

I caught up with Lewis recently at a practice for his club program, the Arizona Firestorm coached by Mike Smith, who does an excellent job and has done an excellent job with this team. The team is loaded with talent from the state's 2021 Class, and Lewis is the top overall prospect among the group.

Lewis is a taller wing prospect with an excellent body already, and is still growing a great deal. He has matured physically in an impressive manner over the past two years, since I first saw him as an 8th grader at the Area Codes Frosh/Soph Showcase. If his development physically and as a player is any indication of his progress for the future, then this young man could develop into a high-major prospect. Either way, he should develop into a mid-major plus Division-I prospect over the next two years of high school.

This past season as a sophomore starter for highly successful head coach Ray Portela and the Vikings, Lewis helped lead the program to an 18-9 overall record on the season in the state's 5A Division. For Sunnyslope, Lewis averaged 7.1 points and 4.5 rebounds per/game as a sophomore - numbers that he should improve on a great deal next season as a junior. I fully expect Lewis to become one of the state's top overall prospects in Arizona's 2021 Class by the end of the summer.

Lewis is a superb talent for the future, as he should develop into a bigger 3/4 prospect, that will be able to play inside and out. He could grow to 6-9 in height, which would make him a very impressive prospect , but only time will tell how he will develop as a player. Judging from his ability to play the game now, and his nice athleticism that he already possesses, it could get very interesting for him.

Lewis advised me that he currently does not have any offers for himself, but he is well deserving of many of them over time. He would like to find a college program over time that has a good balance of athletics and academics, and that will play a style that suits him.

I will continue to follow the development of Lewis as a player and college prospect over the next year, and bring you updates as they begin to develop for him.

Arizona Hoop Review Scouting Report: Lewis a bigger wing prospect that is capable of playing as a 3 or 4 on the floor. He can score with his back to the basket, but is at his best while facing the basket, where he is able to make plays around defenders and also slash and finish at the basket. He is a strong finisher at the rim and inside the paint, and is also a strong finisher in the open floor, where he thrives. A good shooter with some range on his shot, which should expand nicely over time. An active rebounder that is capable of rebounding outside of his area quite nicely. Rebounds on both ends of the floor. An active defender that plays passing lanes. I would like to see him focus much more defensively to maximize his potential as a player. A good ball handler for his size and a solid passer - fundamentally sound. A good shotblocker. Has excellent potential as a prospect with very good upside.