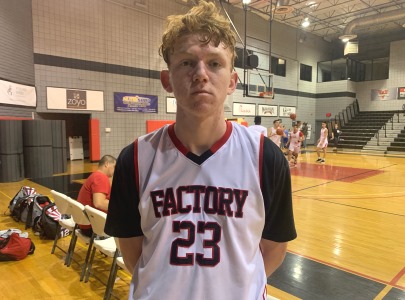 One of the top young prospects in Arizona's 2021 Class is Sunrise Mountain High School's 6-foot-6, 200-pound sophomore wing Colin Carey. After a good sophomore season, Carey turned it up big time in this spring's Arizona Club Basketball League (ACBL), where he led the league in scoring and became one of the state's next top young prospects.

Carey is regarded as an elite level prospect now after a big spring performance, where he positioned himself among the state's best overall talents with a scoring prowess that makes him very intriguing as a college prospect. Carey is coming off a 25+ point per/game average in the Arizona Club Basketball League, organized by Kenny Mullins, who also coaches Carey with his club program The Factory.

With The Factory, Carey also played very strong throughout the spring - playing for the program's 16U and 17U teams. Carey performed at a high level throughout the spring, and should begin to garner serious recruiting interest now as a result, as we head into the summer evaluation period.

This past high school season, Carey averaged 10.6 points and 3.8 rebounds per/game this season. As a junior next season, look for the much improved Carey to improve these numbers a great deal. He should develop into one of the state's top individual scorers and explode during his junior season.

In the meantime, Carey will look to generate recruiting interest for himself. While he does not have any offers to his credit as of yet, this young man is well deserving of numerous ones in the near future. A strong performance for himself this summer will add to his credit, and push his recruitment in the right direction.

Carey is a bigger wing prospect with a a nice shooting stroke with range on his shot and a good overall feel for scoring the basketball. He has a knack for scoring and a scorer's mentality - looking to make plays for himself and others when he gets the basketball in his hands. He also likes to makes plays for others off the dribble, and has he matures physically and mentally, he will develop as a playmaker over time.

I will continue to follow Carey's performance throughout the summer, as I look for him to only continue to improve over time a great deal and become one of the state's most sought after recruiting targets for the 2021 Class.

Arizona Hoop Review Scouting Report: Carey is an elite young scoring talent that has very good size and a good overall skill level as a 2/3 prospect. He is a very good shooter with excellent range on his shot and an ability to score from anywhere on the floor.  He can score inside and out as a result of his competitive spirit and desire to create scoring opportunities for himself.  A proven scorer of the basketball that will become a much better facilitator over time for his teammates, as he matures.  A good scorer in the post and from mid-range also, as he has a soft touch around the basket.  Does not mind physical contact and has good toughness.  A good ball handler and passer.  Fundamentally sound.  A solid defender.  A good finisher in the lane.  A strong rebounder and finisher.  Has a bright future ahead of him, and has become one of the state's top overall young prospects.