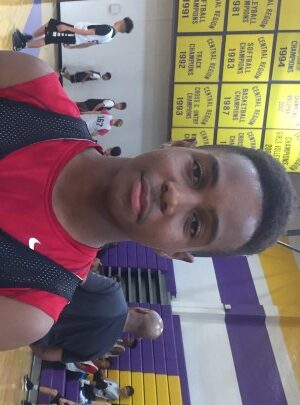 One player to watch this high school season is getting off to an excellent start for himself in his young high school career.  While he is only a mere freshman, Vista Grande High School's 5-foot-10 frosh guard prospect Raishun Wilson will be one of the better guard prospects in this state for the next (4) years.

I caught my first glimpse of Wilson this fall while he was participating in the Area Codes Frosh/Soph Camp.  In the event, Wilson was among the elite overall performers - proving that he can play with the elite talent in his age group in the state.  He was actually the best freshman guard in the event.  Wilson would then follow up that strong performance with another excellent showing in this year's Arizona Preps Fall Showcase.

Wilson is a rare find for his size, as he is very strong and ultra-athletic for his smaller size.  He is a tough and well-built physical guard prospect with a nice motor and work ethic.  He accepts challenges on every play and guards the opposing team's best player.  He is a good shooter that has some range, but will need to add more range over time to stay effective.  He is a strong creator off the dribble and an excellent finisher at the rim.  He is also a strong rebounder for his size, and an excellent defender that is capable of being a lock-down defender.

What is most intriguing about Wilson is that he is an excellent athlete that has high-major athleticism and leaping ability.  He finishes plays well above the rim as a mere freshman that stands below 6-feet in height.  Wilson has a bright future ahead as a result of his overall toughness and athleticism as a player.  What has been most impressive though, is that each time I have seen this young man perform, I have walked away very impressed.

This high school season, while Vista Grande has struggled to win games (4-8), Wilson has flourished - averaging 12.6 points and 4.3 rebounds per/game thus far in his freshman season.  Regardless of wins or losses, Wilson has proven to our staff already that he is among the best young guard prospects in the state.

I look forward to watching this young man develop over the next three years, as he is off to an excellent start in his young career.