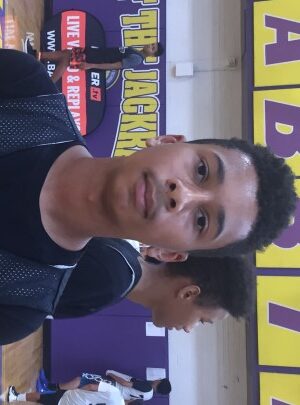 One of the top young prospects in the state of Arizona is having very good success as a youngster at the varsity level this high school season, while helping to rebuild a storied basketball program in the state.  South Mountain High School's 6-foot- freshman guard Zay Freeney, a member of the 2021 Class, is starting as a freshman guard for South Mountain HS this season, and is putting up strong numbers, while leading his program to a 16-10 overall record on the season.

Freeney has brought hope to a storied program with his play this high school season, as he has turned in some strong scoring performances on the season - averaging 13.5 points and 3 assists this season.  His numbers though do not tell the story, as Freeney has had numerous scoring outburst this season - pouring in more than 20+ points on numerous occasions this high school season.

I caught my first glimpse of Freeney before the start to the high school season, after he ranked among the elite prospects in the Area Codes Frosh/Soph Showcase at Mesa HS.  Freeney was among the top overall point guard prospects in the event.

Freeney is a big-time young guard prospect with an excellent feel for the game and a unique ability to make plays off the dribble.  He has a quick and superb handle of the basketball, with very good explosion off the dribble, which allows him to finish plays in the lane and also create scoring opportunities for others.  He has a nice shooting stroke with range and a quick release on his shot.  He is a natural scorer of the basketball, and is fun to watch when he gets it going, and is a good finisher.

He has good lateral quickness defensively and quick hands and feet.  He pushes the basketball up the floor and likes to find the open man.  Freeney is a serious guard prospect for the future, and has the ability to keep South Mountain in every game.  While the program will definitely need some more help for Freeney over time, this young man has what it takes to definitely give the program excellent hope for the future.