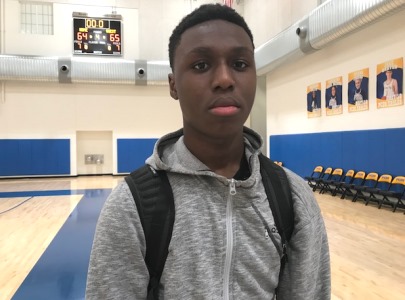 Phoenix Country Day High School is not well known for their athletics, but rather recognized nationally for their superior academic platform that is provided for their students.  The academics at the program is unparalleled in the state, and has created a platform for their students to attend the best colleges in America and even abroad.  The school received a huge positive shot in the arm though, after 6-foot-8 sophomore wing Nate Tshimanga became eligible to play on Wednesday evening in the school's match-up with Horizon Honors HS.

While Phoenix Country Day (9-9) is not known for their basketball talent, the program has produced some good basketball talent over the years.  The program had a terrific season last year and produced guard Andrew Ekmark, who now attends Stanford.  Years ago, the school produced AJ Hess, who went on to have a very good career at Southern Utah.  The school introduced a new future star performer on Wednesday evening, when Nate Tshimanga took the floor.

While the school did not possess any division-I basketball prospects before Tshimanga, they now have an elite level talent.  Tshimanga is a rare find with superior size, skill level and versatility, to go with a very unselfish style of play.  This young man is a tremendous talent on the basketball court, but an even better talent off the court.

"Basketball will be there for him," said Phoenix Country Day Headmaster Andrew Rodin.  "Nate is an even better student.  He is a really neat kid that gets it.  You should see him in calculus.  He is an impressive student."

Tshimanga entered the game for the first time this high school season mid-way through the first quarter, and immediately made his presence felt on the court.  He scored inside and out, made a very impressive scoring move at the basket with his left hand around a defender, knocked down a step-back three-pointer and converted several mid-range shots in the first half.

In the second half, Tshimanga looked much more comfortable in the offense, and even played the point position at times on the floor.  While his teammates still looked for their own shots in the game, Tshimanga almost led his team to a nice come-from-behind victory with his strong versatile performance in the contest.

Horizon Honors would play poised basketball down the stretch, and pull out the nice 65-64 victory in the game, but not without a strong performance from Tshimanga.  In his first game of the high school season, he would put up 19 points, 12 rebounds and 4 assists - proving that he is a big-time prospect for the future.

Tshimanga will enter our new 2020 class player rankings at a nice spot, and has the potential to rise in the near future.  While the class in the state is absolutely loaded and very top-heavy, it just got much better with the emergence of Tshimanga.

I look forward to watching this young man grow and develop over the next couple years, as he is a high level talent - on and off the basketball court.