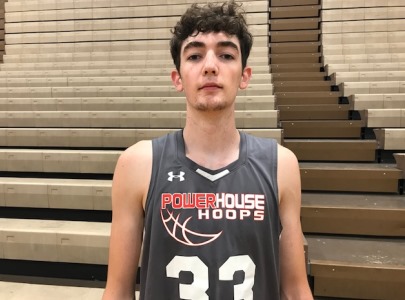 Arizona's 2020 Class of prospects is absolutely loaded with talent for the future.  One of the better prospects in the class is still a relatively unknown prospect by many, but is coming off a strong performance this spring and summer for himself.  Gilbert High School's 6-foot-7, 175-pound junior forward Griffin Lamb is a nice talent with nice upside for the future.  I was impressed with Lamb's ability to play the game this summer, and look for him to blossom into a nice prospect over time.

This spring and summer, Lamb traveled the country with a loaded Powerhouse Hoops 16U team that faired extremely well against top-rated national competition.  Lamb made his case felt on the team, as he played a strong role with a very talented group of 2020 prospects.

Lamb is a nice talent with loads of potential for the future and a nice overall skillset, combined with nice length and athleticism for himself.  He is a tweener still at 6-7 in height, but is still also growing a great deal as well, so he could grow another inch or so over time.  Either way, Lamb has nice upside and length, which allows him to make plays that most players cannot.  He is a stretch-four man at this point in his young career, and could blossom over time into a perimeter player with continued hard work.

Last season as a sophomore, Lamb had a breakout season, but will look to build a great deal on his limited success from his sophomore season.  I expect Lamb to put up considerably better numbers this high school season, as he matures and becomes one of the better 2020 prospects in the state.

Lamb is a nice recruiting target in the class for a smaller college program, and he has considerable promise as a college prospect - he just needs the time that it will take to develop.

Lamb is coming off a strong showing for himself this club season, as he did what he needed to do to make a name for himself on the floor - block shots, rebound outside of his area and guard several positions on the floor - valuable assets for any player or prospect.  I really like this young man as a player and believe that he has the potential to develop a great deal.

Lamb does not currently have any scholarship offers on the table for himself, but that should change over the next year, as more programs begin to realize his potential as a player/prospect.

I will continue to follow his recruitment closely, and bring you any updates as they continue to develop over the next year.

Arizona Hoop Review Scouting Report:  A long, thin and lengthy forward with very good athleticism.  Lamb is able to finish plays well above the rim, and has an excellent ability to follow up offensive rebounds with put-backs.  He uses his length to make plays and keep balls alive for himself - making him an excellent offensive rebounder.  A very good finisher that will only improve over time with increased physical strength and natural maturity over time.  Runs the floor hard.  An active rebounder that rebounds outside of his area on the floor.  A good shotblocker that also changes shots.  Has excellent potential for the future and is an excellent sleeper prospect.  Should blossom nicely over the next two years.  One kid I definitely want to see more of.